Meet Luca who had a very sore knee.  For those footballers and skiers out there you probably know all about Cruciate Ligaments but did you know dogs and cats can rupture their cruciate ligaments too? 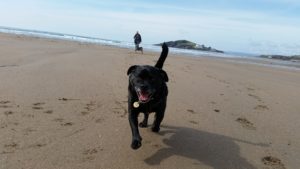 Knees are complicated things and unfortunately often go wrong.  Cruciate ligaments act as an internal stabilisation cord within the knee itself so that when you weight bear, pressure down the thigh bone (femur) is stopped from slipping off the shin bone (tibia) by these cruciate ligaments, thus making for a stable joint that can operate at speed and flex to 90 degrees.

There are actually two cruciate ligaments within the knee.  A cranial cruciate and caudal cruciate ligament that run in opposite diagonals within the joint.   It is the cranial cruciate ligament (CCL) that takes the brunt of the pressure preventing the femur from slipping backwards off the tibial crest.  In high impact sports such as skiing, football and with our dogs turning rapidly these ligaments can sustain a traumatic rupture.  However in certain breeds of dog the angle of the tibial crest slips away resulting in long term wear and tear on these ligaments due to their leg conformation.  Over time they fray and at some point inevitably snap.  This is what happened to Luca. 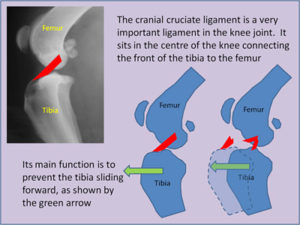 With the CCL ligament ruptured there is no stability to the knee, resulting in a typical tip-toe stance.  Long term this instability is painful and accelerates the onset of osteoarthritis which has already started developing before the rupture, thanks to the slowly developing instability as the ligament began to fray and become weak.

In larger dogs - generally over 10kg - the best option for a ruptured CCL is referral to a specialist orthopaedic surgeon for a metal implant and a procedure called a TPLO (tibial plateau levelling osteotomy) or a TTA (tibial tuberosity advancement) due to the forces that the knee is expected to cope with.

However with lighter patients, they can often do very well with a Lateral Fabella Suture procedure, which is the option that Luca's owners decided to use.  This involves passing a sterile cord around the fabella at the back of the knee and threading it through the front of the shin bone, creating joint stability outside the joint capsule itself.  Generally in larger dogs, this repair will snap, becoming useless but in someone Luca's size this procedure can work well.

Luca was a very brave, very well behaved patient.  He sailed through his anaesthetic and his surgery went well.  As you can see from the pictures below, he had a comfy blow up collar and a very neat row of sutures!  Recovery wise, two weeks later he had his external skin sutures removed and his physio has begun - with any luck he should be running around for Christmas! 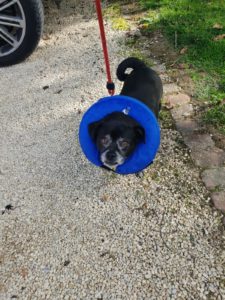 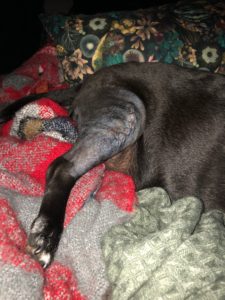