Take a deep breath, how long can you hold it for? We are willing to wager, not as long as amazing Chris the tortoise who managed to survive, despite a seven hour drowning session!  Read on for his amazing story …

With the amazing heat wave this summer our tortoises have been much more active than usual.  However Chris thankfully had very vigilant owners who became concerned at his lack of presence in their garden, considering that normally he was always around and underfoot.

Having kept tortoises for years, they knew that the garden was secure and checked all the usual spots that Chris liked to frequent.  After seven hours with no sighting, they were understandably becoming alarmed.  It was at this point, having exhausted all other hiding spots, that they took the sensible option to drain the garden pond as a matter of urgency.

It was then that their worst fears were confirmed.  Chris was at the bottom of the pond and had been so for hours.  He was limp and lifeless, but knowing how difficult it can be to confirm mortality in a tortoise they thankfully rushed him down as an emergency.

So how do you check if a tortoise is alive?  With their thick protective shells, listening with a stethoscope for a heartbeat is impossible.   The best way to check for a heartbeat is to use a doppler ultrasound to pick up on a pulse which you can see in the video links below. 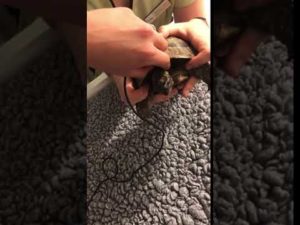 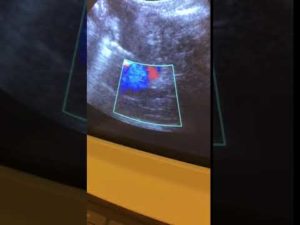 Heilin, one of our brilliant vets, quickly ascertained that although Chris was unconscious and to all purposes looked dead, he did in fact still have a very weak pulse.  Quickly he was given a form of tortoise CPR to encourage water out of his airway and emergency diuretics and oxygen support.

Tortoises do not have a diaphragm or ribs to breathe like we do.  The ribs of the tortoise are fused to the inner surface of the shell and cannot move. The tortoise also lacks a muscular diaphragm, having only a thin membrane to separate the lungs from the rest of the body cavity. The lungs themselves are fixed to the upper part of the carapace. 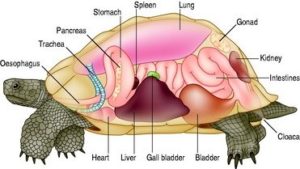 X-rays showed that Chris had a lot of water in his lungs.  Using his legs in a pumping action it was possible to expel as much of this as possible.   Amazingly Chris regained consciousness! 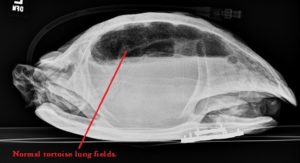 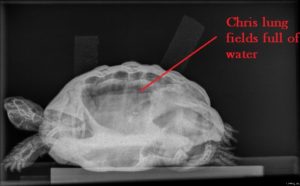 With intensive care, initially feeding via a stomach tube and combined diuretics and antibiotic treatment, Chris has gone forth to make a complete recovery!  As you can see from below he's in fine form!! 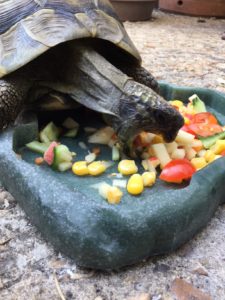