Toffee is our case of the month for September.  She is your typical bouncy springer spaniel, happiest in the brambles and mud but sadly has suffered with ear infections for most of her life.

At only 14 months old Toffee first came to Oak Barn with an ear infection in March.  Both her ears were incredibly swollen and sore.  The ear infection had resulted in both ears having very stenotic canals - this is where the skin comprising the canal becomes very thickened and narrow.

Ear infections are probably one of the most common problems presented at the vets.  Dog ears are incredibly sensitive and unfortunately not that well designed!  As you can see in the diagram below there are two parts to the ear canal - a vertical and a horizontal.  Regardless of the shape of the external ear flap all dogs ears are the same!  The canal is approximately 10 to 15 cm long and is on a downward angle with a 90 degree bend halfway.  It is just skin that forms the canal, wound tightly into a cone which directs sound towards the ear drum.  Just like skin on the rest of the body it needs to be dry and have a good air supply to remain healthy. 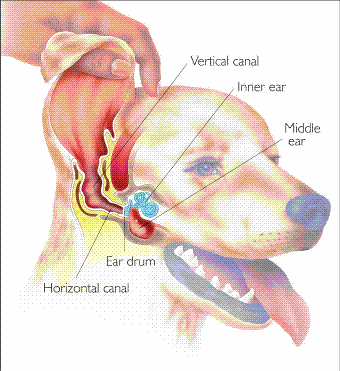 The narrowing of Toffee's ear canals made antibiotic drop placement difficult and with the topical medication not making much difference a swab to culture the infection was sent to the lab.   Unfortunately for Toffee she had what we call a commensal infection of not only a bacteria (a Coagulase positive Staphlococcus) but a yeast as well (Malasezzia pachydermatis).

Commensals are bacteria and fungi that are supposed to live in harmony with the body but occasionally can get out of hand and cause an infection, much the same as athletes foot or thrush in people.  The commensals are able to 'overgrow' in hot moist conditions resulting in an infection.   Unfortunately the body's reaction to an infection is for the skin to swell and produce more ear wax. The wax is a good 'food' for the commensals to live on and as the ear swells further the canal closes down, blocking air flow and thus makes ideal breeding grounds for the infection to take over.

Over the next few weeks Toffee underwent multiple ear flushes where the ears are effectively syringed with sterile saline to clean them and a combination of antibiotics that showed sensitivity to the infection and an ear cleaner were instilled under sedation.  The ear cleaner is designed to change the acidity (the pH) in the ear canal thus making it harder for these commensals to overgrow and cause an infection.

The biggest problem with Toffee was her incredibly tiny ear canals, as you can see in the photos below she had excessive folds of tissue all around her ear canals.  The vertical canal itself was about 25% of the size you would normally expect.  Thankfully the horizontal canal visualised under anaesthetic was completely normal.

Despite lots of hard work Toffee's ears improved but the stenotic canals remained.  As soon as medical management stopped the ear infection came back again.   On discussion with a dermatologist and a soft tissue surgeon it was decided that as Toffee's ears where so small that surgical correction would be the best way forward.  Without this the ears would remain too sweaty and Toffee would be doomed to repeat ear infections for all of her life.

A visiting surgeon came to Oak Barn and performed a difficult operation called a Lateral Wall Resection.  This is where the vertical ear canal is completely removed.  For the non squeamish there are photos in the image gallery at the bottom of the page.  The horizontal canal which is normal is left behind so air can flow happily keeping the ears dry.  This dramatically improves the canal health making it very hard for commensals to form an infection.  As you can imaging this is very difficult and fiddly surgery!  There are some large blood vessels, important nerves and of course the ear drum to consider!

It was decided to operate on both ears at the same time.  Toffee is a very fit young lady and it was not really fair to put her through one op and a lengthy period of lead exercise and buster collars only to put her through the entire procedure again a couple of months later with the other ear.

Two ear surgeries back to back took just over 4 hours and Toffee sailed through her anaesthetic without any problems.  She was supported throughout with a drip to maintain her blood pressure and a heat blanket to keep her warm.  Recovery involved a special pain relief drip.  These are specialist drips combining a cocktail of three strong drugs (morphine, ketamine and lignocaine!).  This trickles pain relief continuously straight into the blood stream resulting in a very happy dopey Toffee for 24 hours after surgery!

She bounced back incredibly quickly and unlike most spaniels tolerated her buster collar very well!  After two weeks she was sedated for her suture removal and as you can see from the photo graphs her ears have healed beautifully.   The horizontal canal opening is nearly 10mm in diameter - a huge improvement on the 2mm diameter she had before with the vertical canal!

The best thing of all is Toffee is now lampshade free and back to playing in the mud and brambles!  Her owners report she is like a different dog - very playful and enjoying her cuddles.

If you suspect your dog may have an ear infection, or just suffers from smelly ears it is a very good idea to contact the practice.  There are some fantastic ear cleaners these days that are designed to protect against commensal infections, best of all they smell nice and aren't greasy like the older cleaners!