This month brave Woody is our Case of the Month when he unfortunately tried to jump over a barbed wire fence and failed.

Woody, as you can see is a very fit Labrador Retriever, at three years old, he needs lots of exercise to keep the tickle out of his feet.  Unfortunately out on a walk he became separated from his owner and in a bid to reach her as quickly as possible decided to jump over a barbed wire fence rather than return back to the open gate.

Miscalculating the height, he grazed the top wire with his chest but worse still did not manage to lift his back legs high enough to clear it.  This resulted in some fairly horrific skin tears.  Thankfully his owners managed to free him quickly and by some miracle the barbs on the fence did not enter his abdominal cavity.  However the injury did nearly give him an instant sex change with large sections of skin torn away, hanging loose.

His owners brought him straight down to the practice and after a full examination he was rushed through to surgery.  A large dose of pain relief was required first!  Only once he was fully anaesthetised and unconscious could his wounds be fully assessed.

He had multiple full thickness lacerations from his chest all the way to his groin.   A large triangular flap of skin had been torn away from his left groin exposing the side of his penis and his inguinal ring with a loose flap extending half way down the inside of his back leg.

All of the wounds were covered in a protective gel and then the hair was clipped away so that they could be properly cleaned to remove lots of plant debris and bits of rust from the barbed wire.  As you can imagine infection was a very real concern so antibiotics were started straight away.

It's interesting to note that we don't give dogs' anti-tetanus injections like we do in people.  It is extremely rare for dogs to contract tetanus, even with a severe injury like this.  Penicillin based antibiotics give dogs all the protection they need.

Once his wounds were debrided and clean they were then sutured.  With the largest skin tear the skin had to be tacked back onto the underlying subcutaneous tissue and drainage holes were left for the likely occurrence of free fluid building up underneath the separated skin.

Brave Woody sailed through his anaesthetic without any problems, he spent a comfortable night in hospital with lots of injectable pain relief before he was comfortable enough to walk by himself with just oral pain killing tablets.

He was very glad to go home with one of our new 'lampshade' collars that are inflatable rings that fit round the neck.  They prevent licking and chewing of the sutures but are much more comfortable and really well tolerated by our patients. 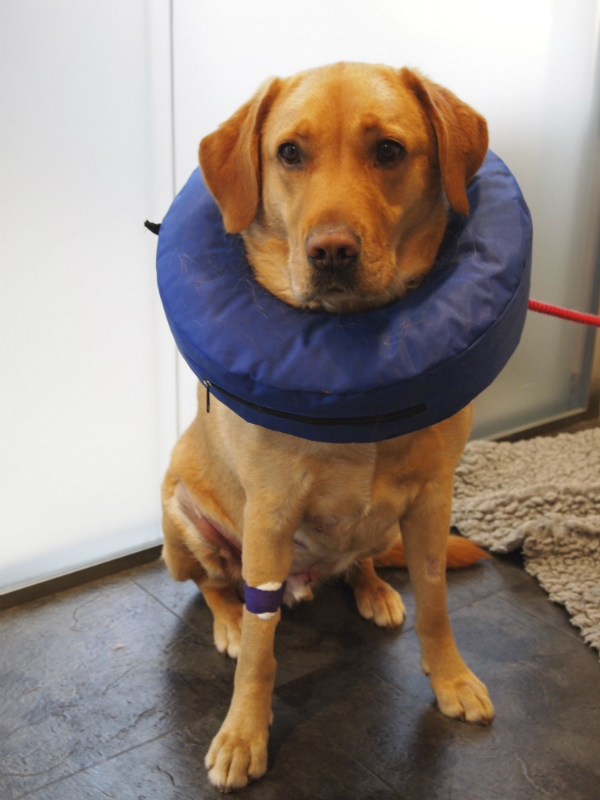 Given the severity of his injuries the sutures were left in place for three weeks although much to Woody's relief he was allowed off the lead after two weeks raring to go and still loving his walks.

Amazingly he has made a complete recovery and now his hair is growing back you can hardly tell anything had happened at all.

For those of you who aren't squeamish there are a selection of photos in the gallery at the bottom of the page showing the extent of his injuries and the repair that took place.  But you have been warned they aren't pretty!