Our case of the month for June is Blot who has had his knees reconstructed! 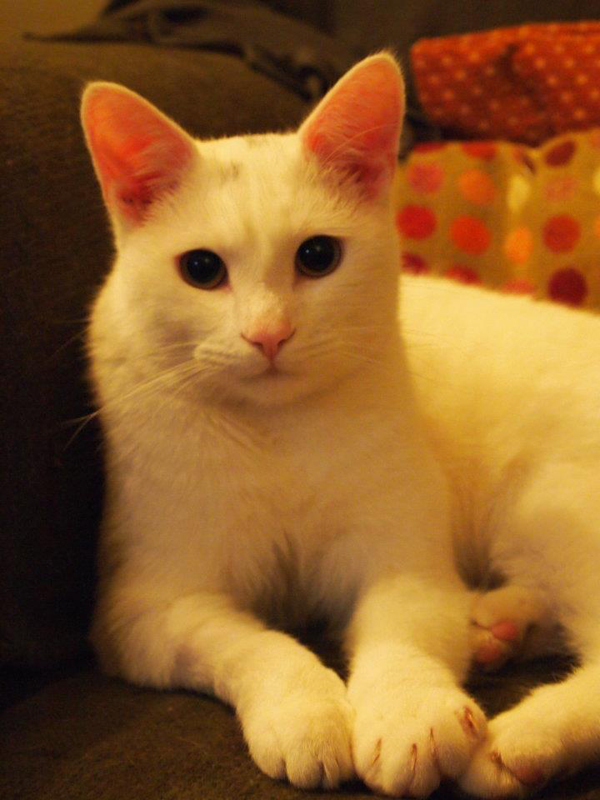 Blot is an 18 month old domestic short hair moggie who had been rescued after being found in a plastic bag in the park at only 6 weeks of age.  Unfortunately for poor old Blot he had been born with knee caps that refused to stay in the correct place, this resulted in his knee caps popping out and becoming stuck.  The technical term for this is a patella luxation and as you can imagine it is very painful when it happens.

The kneecap sits within the very strong patella ligament which connects the thigh bone (the femur) to the shin bone (the tibia) allowing the knee joint (stifle) to bend as a hinge.  This is a mobile joint as we all know and takes a fair amount of pounding on a day to day basis, especially if you are a young cat into mischief at any opportunity.

In Blot's case the groove his patella runs in was too shallow.  On top of this he is bow legged resulting in his hocks almost touching and his knees bending out (so he looks a bit like a cowboy with his hind leg stance!).  Both of these factors from time to time put pressure on his patellae when he moves allowing the kneecap to pop out and luxate medially.

We grade patella luxation on a sliding scale - in Blot's case his right knee was worse affected with a grade III luxation and his left knee was a grade II.  Left untreated he was running the risk of further damage to his knee ligaments especially his cruciate ligament and long term crippling arthritis.

Fixing this problem involves making the groove the kneecap slides in deeper (called a trochleoplasty) and moving the insertion site of the patella ligament.  This involves moving the tibial crest (the knobble you can feel on your shin bone directly below your knee cap) and then using surgical wire to stabilise this whilst the bone heals.

Given that both knees were affected and the recovery period involves cage rest for a minimum of 4 weeks we decided to have both knees repaired at the same time, although this means a two painful knees immediately post surgery Blot was given lots of pain relief, not only by oral medication but also with a special pain killing patch which continuously delivers an opioid (much like the Nicorette patches).

As most of you know Blot is actually lives with Louise and Andrew the Vets at Oak Barn who rescued him.  To have both knees operated on at the same time we decided to refer him to Fitzpatrick Referrals as they perform this type of surgery on a daily basis - this gives the advantage that the surgery is much quicker and recovery time is faster. You might be surprised to hear that we insure our pets too!  Pet Plan have been brilliant and covered all his costs which have been considerable.

Fitzpatrick's did a fantastic job looking after him.  The surgery went very well although Blot's behaviour in the hospital might not have been quite so good!!!  Images of his bionic knees can be seen below. He's been very good recovering at home, surprisingly coping well with his cage rest although it hasn't been easy at times.  Repeat x-rays have been taken this week and the implants are working well so Blot is now enjoying some physio and more gentle exercise.  Fingers crossed by the end of the month he will be back outside no doubt causing chaos again!