Our case of the month highlights some incredible pictures taken from inside the bowel.  This bowel belongs to a handsome and impressive Siberian cat called Sky. Sky lives as an indoor cat with his brother and is only a youngster at 7 months of age.

Sky’s owners had became increasingly concerned as he had been vomiting at regular intervals for nearly 5 days and become very picky with his food.  At only 7 months of age he was normally very keen on his food and generally very full of beans enjoying playing with his brother.  Added to this some of the liquid that Sky was vomiting had become tinged with blood and his behaviour had changed at home to being more withdrawn and quiet.

When he was first seen at Oak Barn Vets Sky had not really shown any improvement with his current medication and had spent some time being hospitalised and re-hydrated with intra-venous fluids. It also appears that he had vomited up a small bundle of twig like material which he must have eaten from somewhere in the house! But sadly despite all his treatment his sickness had continued.

Once we had reviewed Sky’s history and treatment so far, we set about trying to discover the cause of Sky’s vomiting and lack of appetite. There were a number of possible causes for his symptoms such as eating foreign material, a blockage of his small bowel, disease of his pancreas, liver or kidneys, inflammation of his stomach and bowel or even the possibility of intestinal cancer.

Due to Sky’s lack of improvement and the fact he was feeling so unwell, it was decided that endoscopy to examine Sky’s stomach and small intestine would be the next sensible step.

We are lucky to have some visiting specialists and Vets with areas of specific expertise who enjoy working with Oak Barn Vets and one of these is Elise Robertson. Elise specialises in feline medicine and also has a special interest in endoscopy. Thankfully she was available the following day to come to the practice and perform Sky’s procedure. After a blood test and survey x-rays had been taken then endoscopy was carried out to examine and biopsy Sky’s stomach and upper small intestine.

An endoscope is  tiny camera that under general anaesthesia is passed through the mouth, down the throat and into the stomach and beyond!Endoscopy allows examination of a large percentage of cat’s intestinal tract without the need for invasive surgery and using her endoscope Elise was able to examine and biopsy Sky’s intestinal tract up to 1 metre in!

As you can see in the pictures below all was not good in Sky's digestive tract. 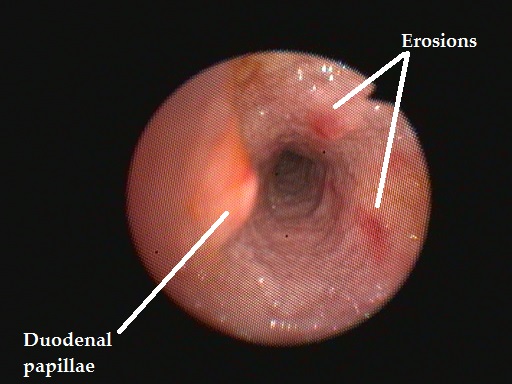 You can find a full album with all his annotated images in the image gallery at the bottom of the page - with these pictures you can also see normal images of normal bowel lining to appreciate quite how angry his bowels were.

Interestingly no foreign material was found but there were regions of marked inflammation and bleeding found in Sky’s upper small intestine (duodenum and jejunum) and biopsies were taken using the endoscope and small, flexible biopsy instruments. As you can see in the picture below where biopsy forceps are being used to take samples. 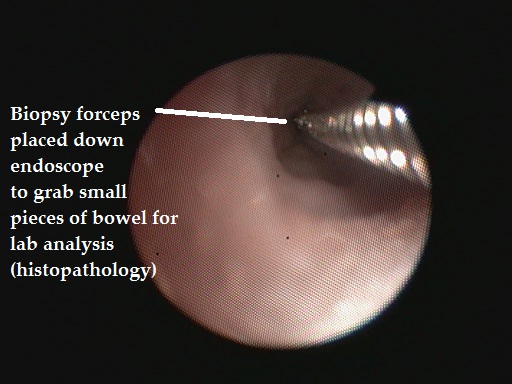 Sky recovered well from his endoscopy and was back home that evening. After a few anxious days waiting for results it was confirmed that Sky was suffering from a form of inflammatory bowel disease.

Although unusual in cats and dogs as young as Sky, inflammatory bowel disease comes about through an over-reaction of the body’s immune system to food or bacteria in the intestinal tract. This in turn can lead to intestinal upsets and digestive problems and often a failure to maintain their body weight.

The blood in Sky’s vomit was coming from ulcers in the lining of the small bowel bowel and he was most likely chewing and eating foreign objects due the feeling of nausea.

Inflammatory bowel disease in cats is a condition that can usually be managed with a combination of diet and medication. Thankfully Sky responded well to treatment and is now back to his usual hungry and boisterous self. As you can see in his photograph his coat now has its old shine back and he is play fighting with his brother again. It is likely that Sky will need careful management and treatment in the future as inflammatory bowel conditions are often life-long. 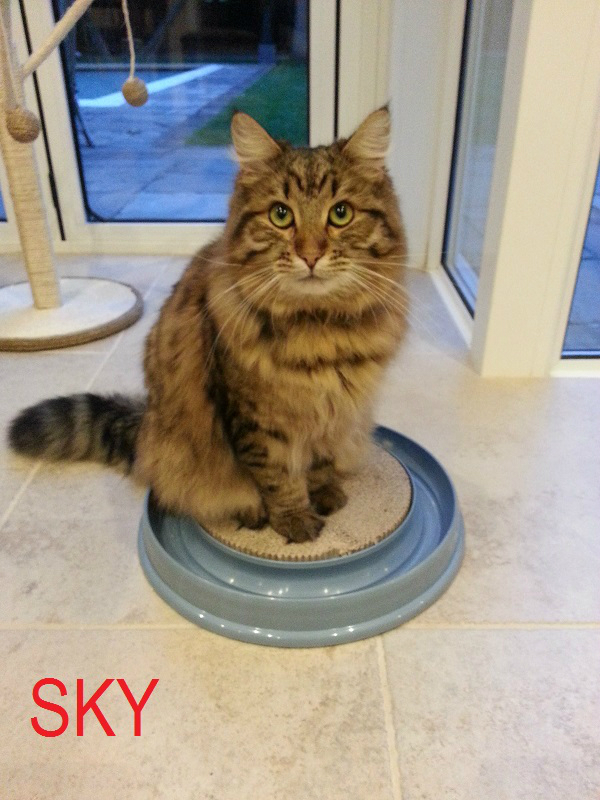