Our case of the month for March 2014 is lovely Maddie.  She is an 8 year old Jack Russell Terrier bitch who lives with Tilly her sister.  Interestingly her case highlights the importance of considering neutering your pet. Be warned though there are some gruesome pictures!

In addition to her case we have included a link to an article written about us by a respected Gun Dog Trainer, Pippa Mattinson.  She brought her dog to Oak Barn Vets for neutering as a referral proceedure and gives her take on keyhole spays - A Different Way to Spay.

For those of you that are avid readers of “case of the month” you will notice that this illness has been looked at before. We felt that it was such an important condition to look out for and prevent that a bit of revision would do no harm!

Maddie came to Oak Barn Vets in early March after her owner had noticed that she had seemed under the weather and a bit bloated for a few days. She had also recently had some diarrhoea and her thirst had increased. However she was not being sick and was still going out for her walks.

Maddie had had a normal season a few months earlier and was not known to be pregnant. It is typical for most bitches to come into season around every 6 months or so at which point a bloody discharge from their vulva is normal but this was too early for Maddie to have another season so warning bells begin to ring when after a couple of 'off days' Maddie started to have a vaginal discharge.

The symptoms Maddie was showing were consistent with her having an infection of her uterus (womb). We see this condition quite frequently in older entire bitches and it is often a consequence of repeated hormone changes each season where the lining of the uterus thickens and forms multiple cysts which then become infected. The medical name for this condition is a pyometra and in certain cases if undetected can be fatal.

Internally the uterus becomes filled with inflammatory and bacterial cells (pus) which in turn causes some of the other signs seen such as a high temperature, increased thirst, abdominal bloating or discomfort. Not all cases of pyometra involve a discharge from the vulva and this is called a “closed” pyometra, in the worst cases the uterus can rupture.

An ovariohysterectomy (spaying) is the treatment of choice for a pyometra and as Maddie was a fit and healthy girl in every other way, after starting intra-venous fluids and antibiotic therapy she was taken to surgery. In certain circumstances we can treat a pyometra medically but this is normally reserved for bitches with a low risk of rupture and when they typically have an open pyometra (see case of the month “Holly” May 2013). These patients are then spayed before there next season when the condition is likely to return.

In Maddie's case she had been ill for a little while before the discharge began.  Given her bloated belly we were concerned that there was a large infected uterus within her abdomen - ultrasound scanning and surgery confirmed this as you can see in the pictures during surgery and after removal.  Bear in mind the uterus once removed weighed nearly a kilo and Madd 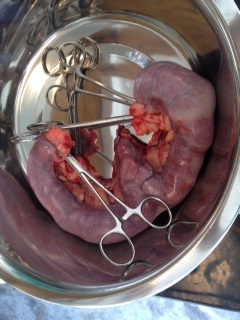 ie before surgery only weighed 8.2kg! 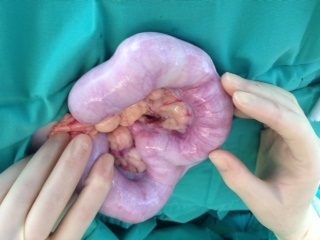 Amazingly Maddie recovered very quickly after her operation.  As soon as the infected material had been removed she immediately felt much better.  After a few hours she was up and about and eating well.  She went home the same day with a course of antibiotics and hasn't looked back since!

At Oak Barn Vets we encourage neutering of bitches ideally before their first or second season to reduce the risks of both pyometra and mammary cancer. The pros and cons of neutering bitches is always a topic for discussion with owners and we are more than happy to give advice and guidance regarding this matter. The vast majority of bitch spays at Oak Barn Vets are performed with keyhole surgery so this gives the added peace of mind that this important procedure is carried out with patient safety and comfort being the priorities.