One of our star patients during August was Betty a delightful 9 year old black and white cat who nearly died from a dangerous infection.

A well-travelled individual, Betty moved from Hong-Kong to the UK in 2013 and other than receiving some much-needed dental treatment for a broken tooth she had always been fit and healthy. 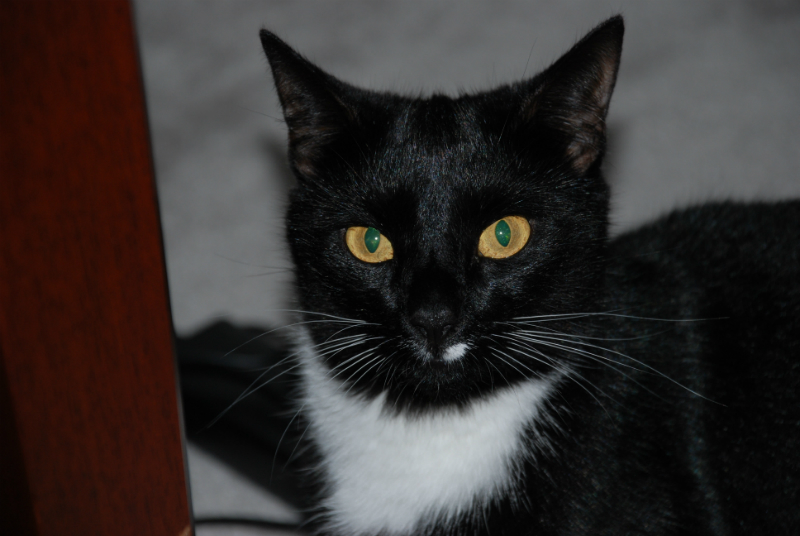 Betty’s owner noticed that she had become unwell over a few days with an obvious loss of appetite and rapid weight loss.

When she was first seen by Louise she was dehydrated and her right kidney was enlarged to feel. A blood test was quickly taken and run in our in-house laboratory.

Blood tests can give information involving both the function of major organs of the body, such as the liver and kidneys as well as showing levels of red and white blood cells helping to indicate problems such as anaemia and infections. Betty’s results showed that her kidney markers were dangerously elevated as well as her having a very high white blood cell count suggesting an infection.

Betty was admitted for hospitalisation and a urine sample was collected directly from her bladder using a needle and syringe, this is called cystocentesis. This allowed a 'sterile' collection of urine for bacterial culture.  (Catheterising and obtaining a sample that way often picks up normal bacteria (commensals) within the external genitalia and urethra). Sure enough her urine was full of bacteria and white blood cells so the sample was sent off to our external laboratory, via courier, for them to grow and identify the bacteria.

Tests such as this are very important to help us treat bacterial infections successfully. The use of antibiotics has been revolutionary in the way human and Veterinary healthcare has evolved but there are growing concerns with the development of antibiotic resistance if they are unnecessarily or over-used. Subsequently the laboratory was able to tell us which antibiotics were needed to treat her specific infection.  Intially the lab thought there  had been a mistake made with the sampling as there were so many bacteria in her urine!  Commonly this would be thought of as a contaminant from a sample taken from a litter tray.  After confirming with the lab that indeed the sample had been obtained via sterile cystocentesis they quickly identified the bacteria and confirmed the best antibiotics to treat this infection.

After 24 hours of intra-venous fluids, intra-venous antibiotics and supportive care Betty started to feel better and her blood levels were showing some gradual improvement. An ultrasound scan of her kidneys revealed her left kidney to be very small with little evidence of any viable blood supply. Her right kidney was having to do all the work - as you can see from the ultrasound pictures below the size difference is amazing! 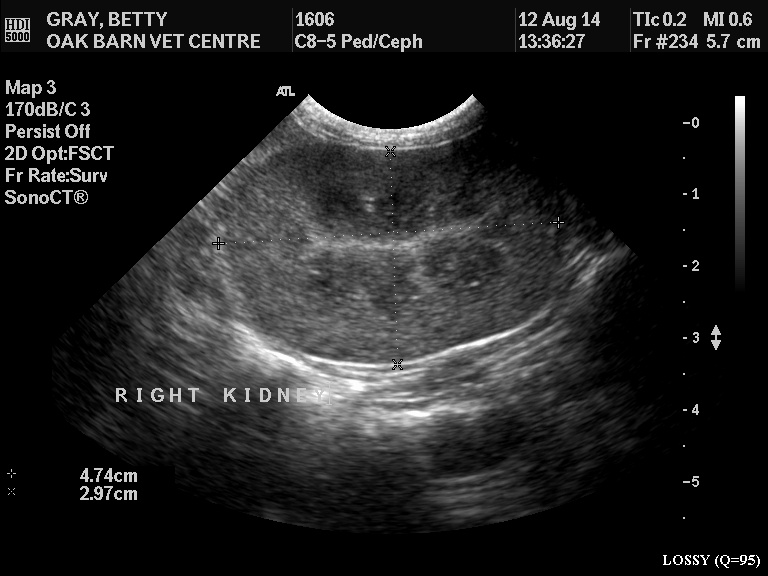 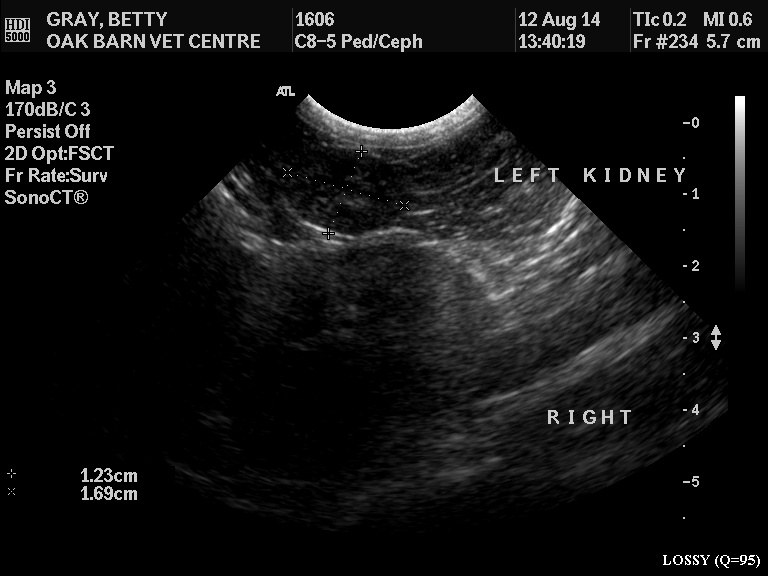 Kidney infections (pyelonephritis) in cats can come about for a number of reasons. Most commonly bacteria reach the kidneys via the blood stream (haematogenous) and this may be from a wound, abscess or even from the mouth. Occasionally kidney infections can stem from the bladder or lower urinary tract and may occur secondary to problems such as cystitis, chronic kidney disease and diabetes.

Betty stayed on a drip for 3 days to support her kidney function by which time she was eating well and enjoying regular visits and cuddles from her family and the staff. At this point Betty was stable enough to go home with oral medications and a special diet.

We are monitoring Betty’s recovery over time with blood and urine testing.  It is likely Betty will be left with some kidney damage but with careful monitoring she should be able to lead a normal lifestyle. As you can see from these charts below her levels are responding nicely.  Her white blood cell count is reducting - these are the cells that fight infection, and her Blood urea nitrogen and Creatinine levels (both toxins that build up if the kidneys are not working properly) are reducing to normal levels.  Watch this space for further info on Betty as she continues to get better! 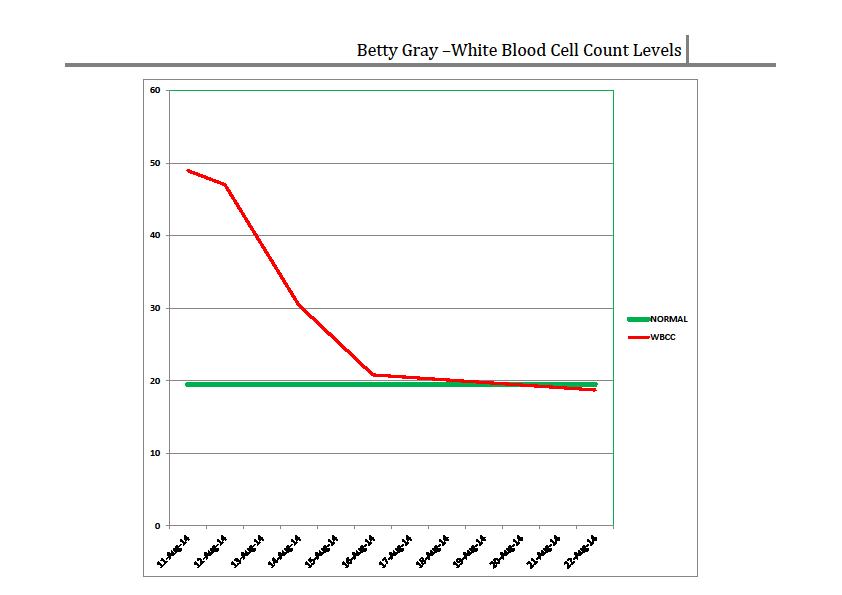 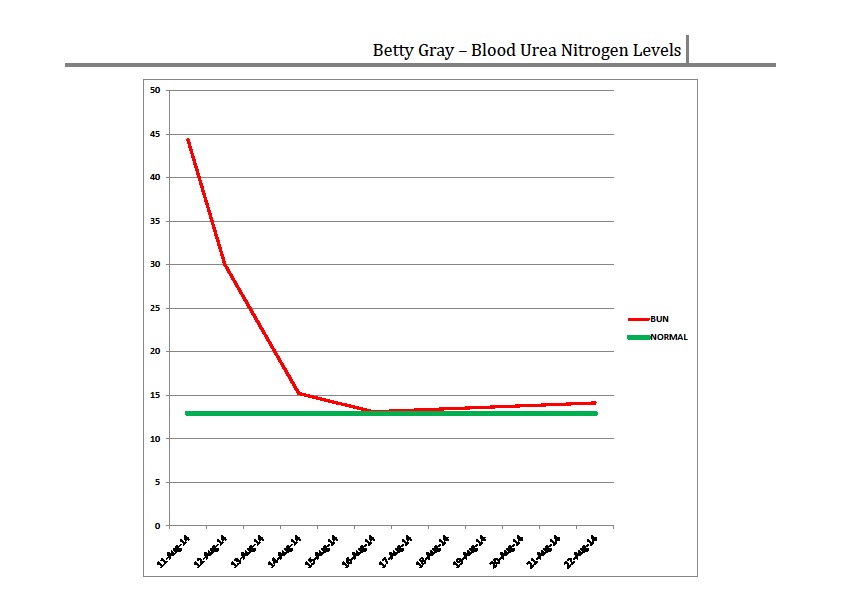 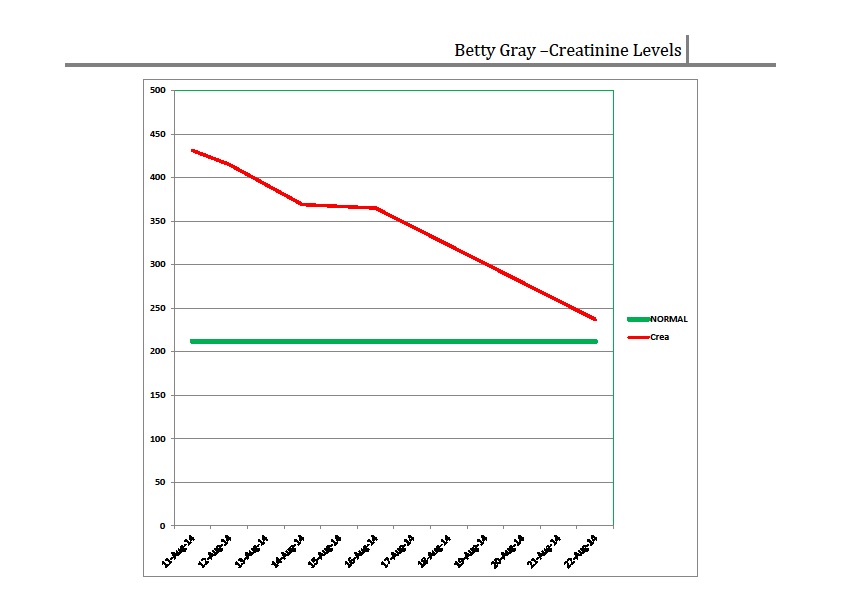