Jed is a bouncy, mischievous black Labrador who was rescued by his owners back in 2011 - read his story and see how a nasty tummy upset nearly gave him a heart attack!
Jed is normally full of life and a typically greedy labrador who will eat anything. However prone to the odd tummy upset his owners realised something was very wrong when they woke up and found Jed producing lots of vomit and diarrhoea with large amounts of blood coming from both ends. He was also feeling quite sorry for himself and had completely lost his appetite which was very unusual! They sensibly rushed him straight down to the practice.

On assessment Jed was definitely feeling out of sorts and was quite dehydrated. He had a very grumbly tummy and it was evident that we needed to resolve his dehydration and start investigating the root of the problem and treat accordingly.

First things first, we took some bloods to do a general evaluation of his body systems and see if there was any other organ involvement (like the pancreas). Other than quite a marked dehydration and lots of young red bloods cells, these results were fairly unremarkable. 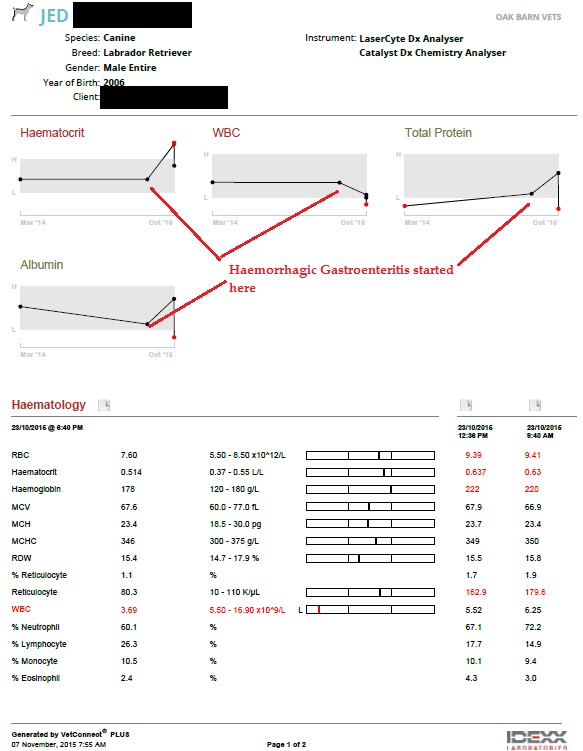 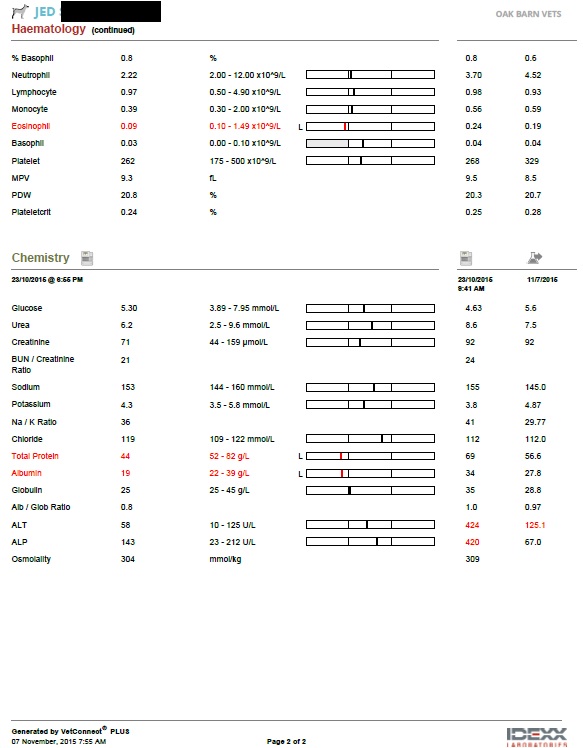 He was immediately placed on intravenous fluid therapy to correct his fluid deficit. There was no evidence of any foreign body or bowel obstruction so he was also given an anti-sickness injection and some antacids.

He very helpfully produced some samples for us (!) and we managed to rule out some infectious causes like parvovirus. However, when evaluating the whole clinical picture it was clear that there must have been an infectious component, either a viral or bacterial infection, so he was also started on some broad spectrum antibiotics.

As the day progressed all seemed to be going well, there was no further vomiting or diarrhoea and he seemed to be feeling better now he was rehydrated. However, there was a sudden onset abnormality to his heart rhythm. Additionally, the beating of his heart did not synchronise with his pulses. Repeat blood testing confirmed his electrolyte levels were normal but his protein levels and infection fighting cells were low, confirming suspicions of a nasty condition called haemorrhagic gastroenteritis.

We decided to have a look at the electrical activity of the heart via an ECG (electrocardiogram) to try and work out the reasoning behind the heart’s abnormal rhythm.

The heart is made up of various chambers which need to contract in a regular order to pump blood around the body. Dangerously for Jed the rhythm was grossly abnormal with a nasty arrhythmia – you can see the abnormal ‘heart beats’ on his ECG trace – they are wide and slow and indicate that the heart is not beating correctly. These irregularities are known as Ventricular Premature Complexes or VPC’S. This occurs when the heart muscle is inflamed – given Jed had a nasty case of haemorrhagic gastroenteritis the likelihood is that the infection has travelled in his blood stream and we now had not only vomiting and diarrhoea to contend with but potentially life threatening endocarditis (inflamed heart muscle).

Jed was isolated and put on strict rest. Medication was given to slow the heart down and further supportive therapy was given via his drip. His cardiovascular parameters were closely monitored and repeat ECG readings were taken which you can see below.

Thankfully Jed was an excellent patient and responded very well to his treatment. The VPC’s settled as his heart returned to a normal rhythm over the next 24 hours. By the next morning we knew he was feeling better as he had also got his appetite back and was demanding some breakfast, which was a huge relief!

He was happy to find out that he was able to go home, carrying on with his current medication and under the strict instructions of keeping him rested! Regular checks over the next week indicated that his heart had made a complete recovery and although Jed was still on a bland diet his bowels were behaving themselves as well!

Unfortunately, this is the time of year where we often see sickness and diarrhoea in our pets. As always if you are at all concerned please contact us. Thankfully Jed has fortunately made a full recovery and is back to his happy greedy ways, we do not expect him to have any further heart problems which is great news! 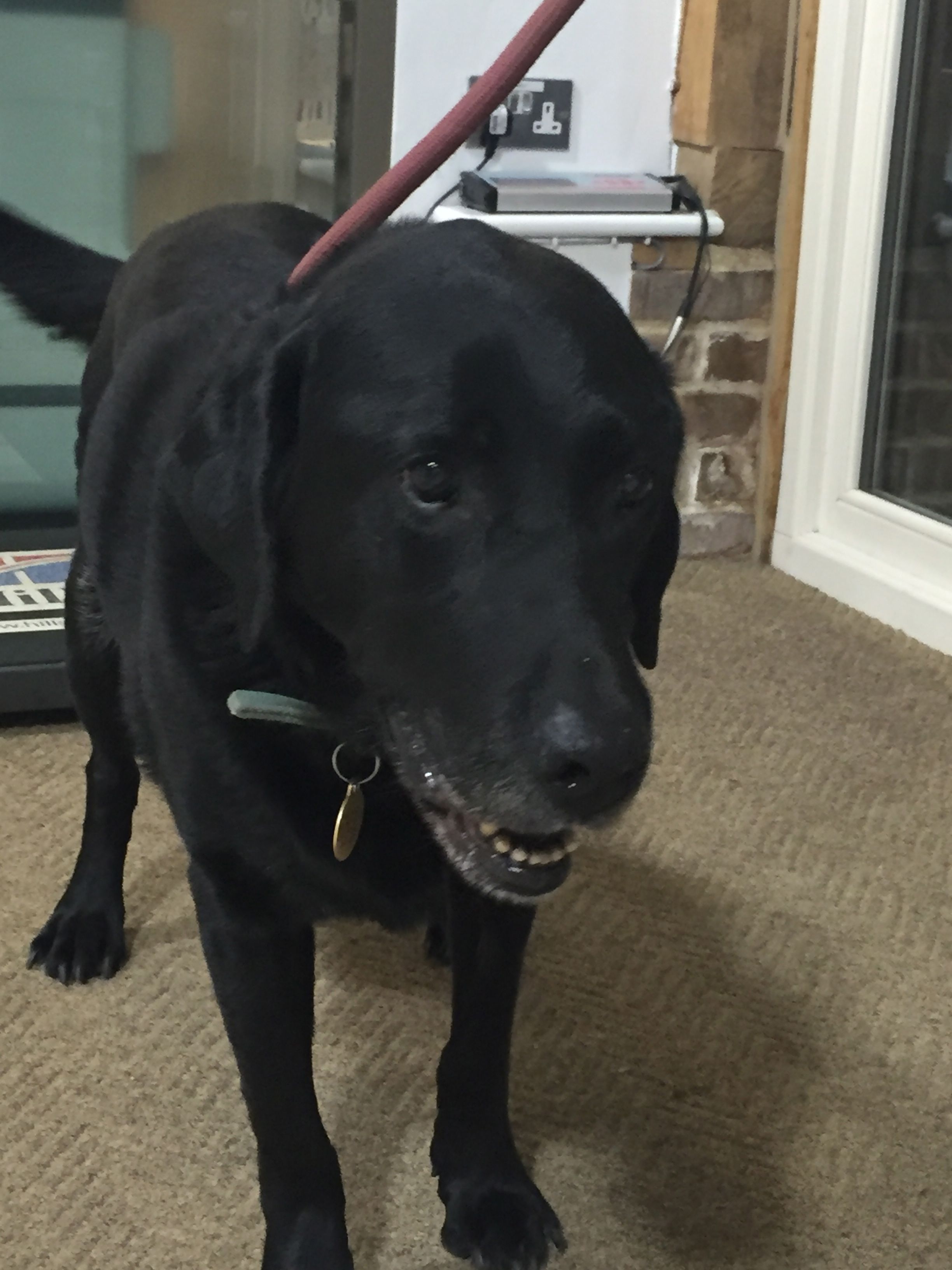