“like buses!”
You know that saying about buses; that you spend ages waiting for one and then two come along at the same time? Well sometimes it works like that with clinical cases. Jasper and Buffy were both brought in by their owners within a week or two of each other with similar complaints.

Routine blood and urine testing by our in-house analysers showed normal kidney and liver results and no signs of anaemia or infections. However their blood tests also revealed mildly elevated blood calcium levels in both dogs.

Both Jasper and Buffy’s owners were quizzed on whether their dogs had had access to any medications, vitamin D supplements or skin creams and no connections could be found.

High blood calcium was confirmed in both dogs by measuring their ionised calcium level at a specialist laboratory. This is the calcium in the blood stream that is truly available to the body and is a more accurate reflection of calcium levels. 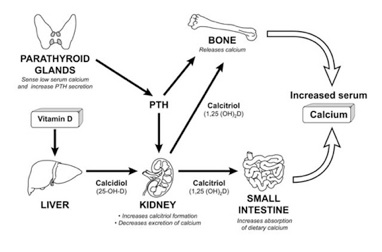 Causes of high calcium include some forms of cancer which release substances similar to parathyroid hormone, toxins such as vitamin D as found in fish oil supplements and skin creams, granulomatous inflammation within the body and primary hyperparathyroidism, which is an excessive production of parathyroid hormone from the parathyroid glands.

A specialist laboratory in Cambridge is able to measure blood parathyroid hormone levels so arrangements were made to measure Jasper and Buffy’s levels. As parathyroid hormone is so delicate and prone to degrading rapidly outside the body careful handling and transport of the samples had to be carried out to get meaningful results. The blood samples had to be collected in chilled tubes, centrifuged in a cooled centrifuge (ours had to go in the fridge!) before being separated and immediately frozen and shipped.

With the help of Audrey’s ultrasound examinations and some delicate surgery under a general anaesthetic performed by Andrew Jasper and Buffy’s enlarged parathyroid glands were surgically removed and sent away to the lab for analysis.

The blood calcium levels of both dogs were monitored closely for a few days after surgery to assess their response and both normalised rapidly.

After a nervous wait for their pathology reports both dogs were diagnosed as having benign changes, Buffy’s gland had a small growth and Jasper’s was hyperplastic (increased in size).

Both Buffy and Jasper’s treatment cured them of their condition without any significant long term effects.

Primary hyperparathyroidism is an uncommon condition so to have two cases simultaneously really was unusual.