Zanzi is a very precious puppy, it's thankfully not every day that we drop everything at the Barn and end up with most staff members in theatre fighting to save a life.(Be warned there are some gory photos!)

Zanzi and joined his new home soon after the tragic loss of his owner’s previous, young flat coat retriever in a road traffic accident. A worthy replacement he quickly set to task introducing himself to all the members of the Oak Barn team as well as anybody else who would give him attention.

Normally with energy abound it made it all the more obvious to his owner when, after a busy morning with a playmate on a bank holiday weekend, Zanzi was feeling rather off colour and uncomfortable. A trip to the out of hours service for a full examination and x-rays showed no obvious traumatic injuries but pain relief and rest appeared to make little difference to Zanzi’s demeanour and appetite.

After an uncomfortable night thankfully Zanzi’s owner rushed him to Oak Barn Vets for further examination and treatment first thing in the morning. Usually one of his favourite places to charge around Zanzi did little more than a slow wag and then slumped to the floor. A full clinical exam showed him to have significant abdominal pain as well as an elevated temperature and early signs of shock.

Admitted as an emergency and started on shock dose intra-venous fluids, Zanzi was given pain relief while a FAST Ultrasound examination was carried out. This is a specific ultrasound examination carried out in emergencies to look for signs of fluid in the abdomen. Sure enough free fluid was found in Zanzi’s abdomen and a needle sample (abdominocentesis) was taken with guidance from the ultrasound machine. Additionally dilation of Zanzi’s bowel was found by ultrasound and a quick abdominal x-ray confirmed this to be a section of small bowel filled with gas and fluid. 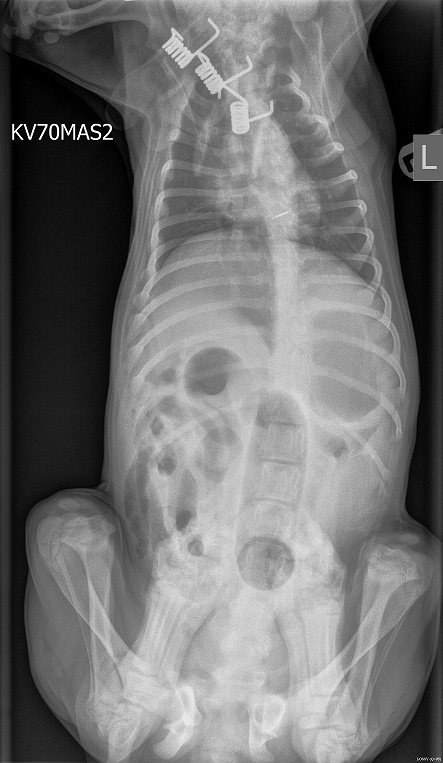 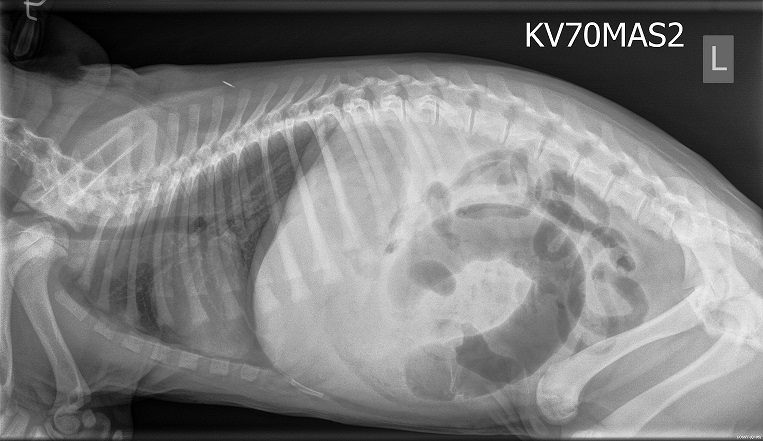 While Zanzi was being stabilised the fluid was analysed under the microscope and was found to be a mixture of blood and inflammatory cells called neutrophils. Zanzi had what is termed “an acute abdomen” which warrants emergency surgery despite his young age and frail status.

Under a general anaesthetic an exploratory surgery was performed by Louise and Andrew which revealed a section of small intestine (jejunum) which had become trapped by a small ligament, likely the remains of Zanzi’s umbilical vessels. This entrapment had caused the intestine to fill with gas and fluid and stretch, losing its blood supply and risking rupture. The section of necrotic (dying) bowel was carefully released and brought out of Zanzi’s abdomen to reduce the risk of contamination if it should suddenly burst.  You can see from the photographs it was already starting to split. The damaged bowel was then surgically removed before the two ends of healthy intestine were joined back together (an anastamosis). 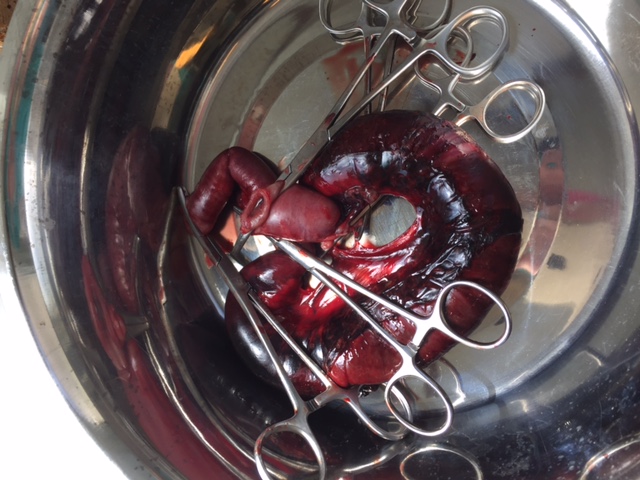 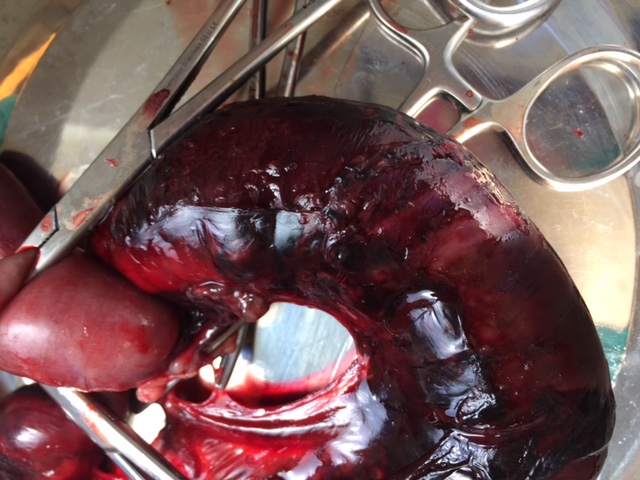 After carefully ensuring that the repair of Zanzi’s bowel was leak proof, the rest of his abdomen was, flushed with large volumes of warm saline and examined for any further damage. Everything else looked in good shape so Zanzi’s abdominal muscles and skin were stitched closed before he was woken from his anaesthetic.

With critical care and some cuddles and reassurance from the nurses Zanzi made a comfortable recovery from his surgery and was able to go home the following evening. Before long he was acting like a normal puppy again.

Loss of a short section of small intestine should not affect him one bit in the future and he is back to eating and growing well. Zanzi was unlucky to need emergency surgery at such a young age but it doesn’t seem to have dampened his enthusiasm for coming back to see us!