Shera is typical of her breed. A one year old female Bengal cat she has both good looks and athleticism.  Unfortunately though her active lifestyle did lead her into trouble!

Shera arrived at Oak Barn Vets having come in from her night time, outdoor adventures. Uncharacteristically, rather than enjoy some breakfast and a fuss, she took herself straight to bed and stayed firmly put. Having noticed some blood spots, and with Shera refusing to move, her owners became increasingly concerned and brought her into us to be examined.

Karen, one of our qualified Veterinary nurses, triaged Shera straight away and was concerned that she was more injured than was immediately obvious. Further Veterinary examination suggested that she had sustained significant injury to one of her back legs as well as having some small open wounds. Shera was admitted for pain relief and further diagnostics.

After starting intra-venous fluids, pain relief and assessment by blood testing, some survey x-rays were taken confirming that Shera’s ribs, lungs and spine were not injured but she had a fractured right tibia (the shin bone in her right back leg). The fracture appeared to be non-displaced meaning that the bone ends were still next to each other rather than moving a distance apart. No other serious injuries were found to her bladder, bowel or other internal organs.

After a good night’s rest and ongoing pain relief and antibiotics Shera was sedated for more detailed x-rays of her fractured leg as well as her pelvis.

Not only had Shera fractured her right tibia but she had also fractured the pubic bone of her pelvis, apparently by landing on something sharp as there was a deep wound overlying the fracture.

We checked her pelvic canal to ensure that healing of the fractured pubis would not cause any long term problems with constipation and this was all normal. 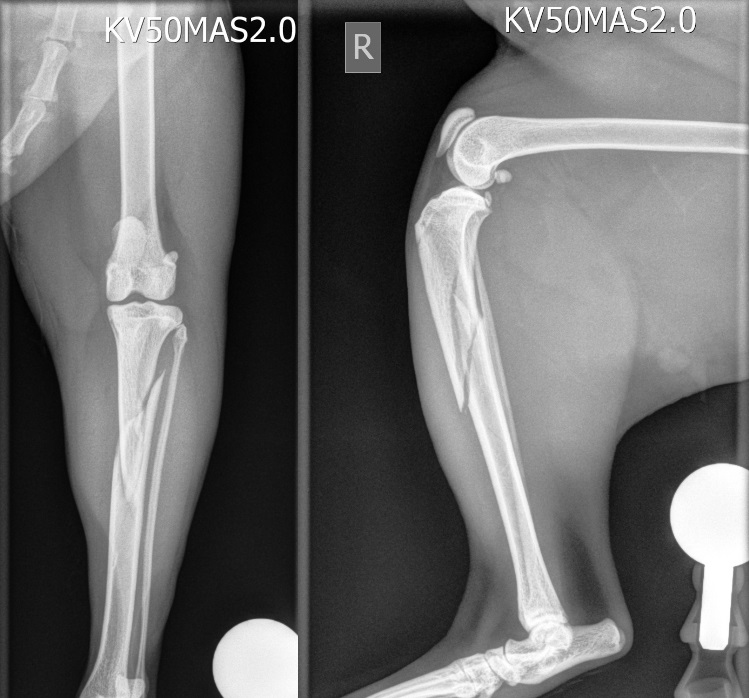 Further x-rays of her tibial fracture showed it to be a long spiral fracture, typically caused by a sharp twist of the bone and the fracture was being supported and splinted by a fine bone called the fibula which had not fractured.

This type of fracture is quite unusual as, despite the severity of the fracture, these typically heal well with rest and restricted activity as the fibula acts as a natural splint for the broken bone.

Shera had to get used to quiet living for a few weeks as her fracture started to heal and she was back weight bearing on her leg remarkably quickly.

She was back to Oak Barn Vets 6 weeks later for some follow up x-rays which show remarkable progression in bone healing of her fracture. In just 6 weeks she was not showing any signs of lameness and was keen to jump around the consult room!

Cases like Shera show that, given the right circumstances, our animal patients have great capacity for healing and that sometimes doing very little can be a great treatment! Shera can start to begin exploring the outdoor world again, hopefully a bit more sensibly than before, and should be left with no long term problems from her injuries. 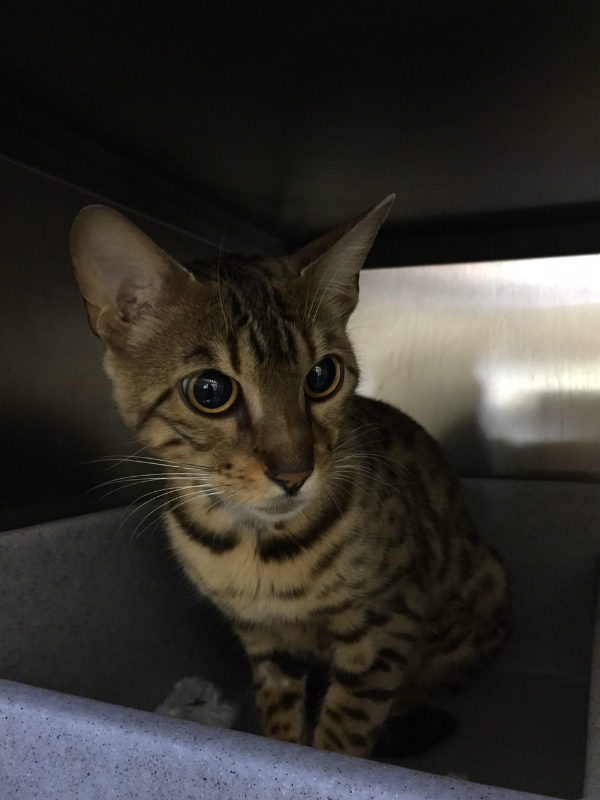