Case of the Month November 16

Scrumpy is a 13 year old fox terrier who was showing no real signs of slowing down, despite her age. That is until she recently developed a cough and shortness of breath.

When she came to see us at Oak Barn Vets she had been treated for suspected kennel cough but had not shown any significant improvement. For Scrumpy to retreat to her bed rather than wanting to go outside and charge about on a walk, there was obviously something wrong.

Having shown only mild improvements with a course of antibiotics, anti-inflammatories and cough suppressants, Scrumpy came and spent the day at Oak Barn Vets to have her cough investigated further. After some mild sedation and a series of chest x-rays we had to break the news to Scrumpy’s owner that she had a suspected lung tumour in the left side of her chest. 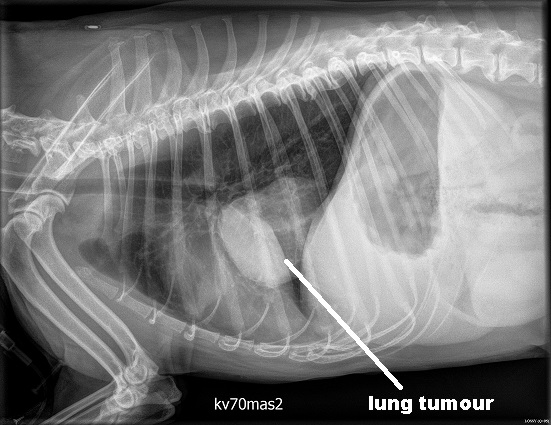 You would be forgiven for thinking that this might be the end of Scrumpy’s story but lung tumours in older dogs are not always a “worse case scenario”. Solitary, primary lung tumours can be removed successfully, often giving palliation for several months to years and occasionally even a cure. All the potential risks and post-operative considerations were discussed regarding Scrumpy’s surgery and a date was booked.

Dogs can cope well after losing a surprising amount of lung tissue, with the remaining lung partly expanding to help fill the space left behind. Scrumpy’s chest had to be opened between two of her ribs on the left side (a thoracotomy) in order to gain access to the affected lung lobe. This was then removed with the airway and blood vessels supplying the lung being carefully sealed to avoid any leakage. A chest drain was placed to monitor for air leakage or bleeding after surgery.  Photographs of her surgery can be seen in the gallery below for the unsqueamish.

A combination of careful anaesthetic monitoring by our team of nurses, who had to ventilate Scrumpy through her surgery, and some well-planned surgery to remove the lung tumour along with the associated lung lobe, meant that Scrumpy was soon in recovery. After a period of intensive care and plenty of pain relief Scrumpy was getting back to her usual self, enjoying breakfast in bed and plenty of fuss. The following evening we were able to remove the drain from Scrumpy’s chest and she could go home for further rest and recuperation. 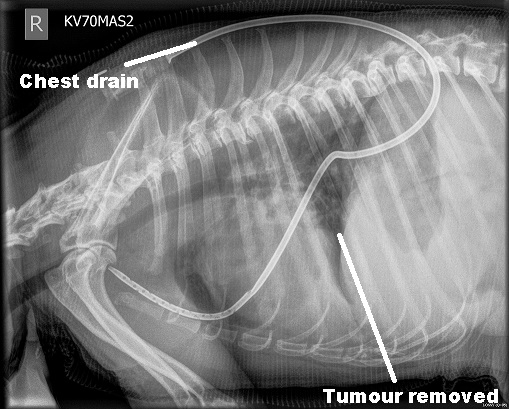 The lab confirmed that the removed lung lobe did indeed contain a 5 centimetre malignant lung tumour called a pulmonary carcinoma. Although this cancer will likely be life limiting for Scrumpy these tumours are often slow to spread and grow so she can hopefully enjoy plenty of her retirement without a cough or discomfort.

We are often asked if pets are too old to have anaesthetics or certain procedures carried out and it is a fair question because, with age, often comes other conditions which may affect a patient’s abilty and speed of recovery. However with the advances in Veterinary Medicine, and particularly with anaesthetic drugs and monitoring, the risks to a patient of any age undergoing anaesthesia are incredibly low.

As Scrumpy has demonstrated older patients are able to recover quickly and comfortably from major surgery, going on to enjoy a good quality of life as a result.