Occasionally at the Barn we will see outbreaks of infectious disease.  Unfortunately poor Kipling is our Case of the Month having contracted a nasty infection of Giardiasis like many other canine patients we have been seeing recently.  Read on to learn about this nasty infection and how to treat and prevent it.

Kipling is a lovely 3 year old male cocker spaniel.  Better travelled than most he moved from India to the UK in 2016.   Enjoying the cooler climate he is fully vaccinated and up to date with his parasite control.

Normally fit and healthy he consumed his breakfast as normal and had a normal day.  However his owners were mildly concerned that he refused his supper.  Flatulence followed but by 9pm he was suffering from profuse smelly watery diarrohea and vomiting.   Worryingly he didn't want to get up and was showing bouts of colicky abdominal discomfort.

Despite emergency intravenous fluids, pain relief and anti-emetics he still didn't want to eat anything and the diarrohea continued overnight.

Analysis of the diarrohea gave us the answer to his sudden illness.   The poor boy had contracted a nasty infection called Giardiasis.

Giardia is a single celled protozoal parasite.  It is not a worm or a bacteria or virus but a species all of its own.   Invisible to the human eye it is transmitted by infected faecal material and can live quite happily in the environment as cysts waiting to cause an infection.   Classically our dogs contract the infection from either eating contaminated faecal material or the grass/soil/water that has come into contact with infected material.  Unlucky Kipling could have quite easily caught this infection from drinking out of the wrong puddle.

Once ingested these giardia cysts set up house in the intestinal lining.  As adults they are known as trophozoites.   The adults will divide and effectively 'breed' producing more cystic forms.  These are then expolsively ejected in very watery smelly diarrohea to go on to infect further unfortunate dogs and potentially cats and Humans.  Yes you read that correctly people can contract Giardia too resulting in similarly unpleasant vomiting and diarrohea not dissimilar to amoebic dysentary.

Thankfully for poor Kipling once he started on medication he improved but it did take a couple of days for him to return to his normal jolly ways.

Most at risk of contracting Giardiasis are young puppies and immunosuprressed individuals.  Often adult dogs will develop their own immunity to this nasty parasite.   However we do find the odd dog after having the disease will intermittently shed cysts which is why we ask for a three day pooled faecal sample when a patient has made a full recovery and has finished their medication.

Kipling feeling much better at home! 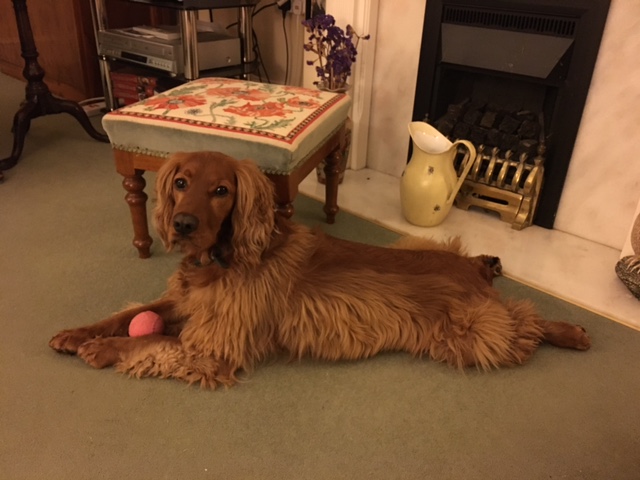