What's that you are probably asking?  A grass seed head - looks pretty innocent doesn't it? Well read on and learn about poor Enzo's tale and how these seeds can cause so much trouble!

Meet Enzo, he is constantly on the go. A highly energetic fit spaniel cross, he loves nothing more than being out and about charging around on his walks and exploring the undergrowth. 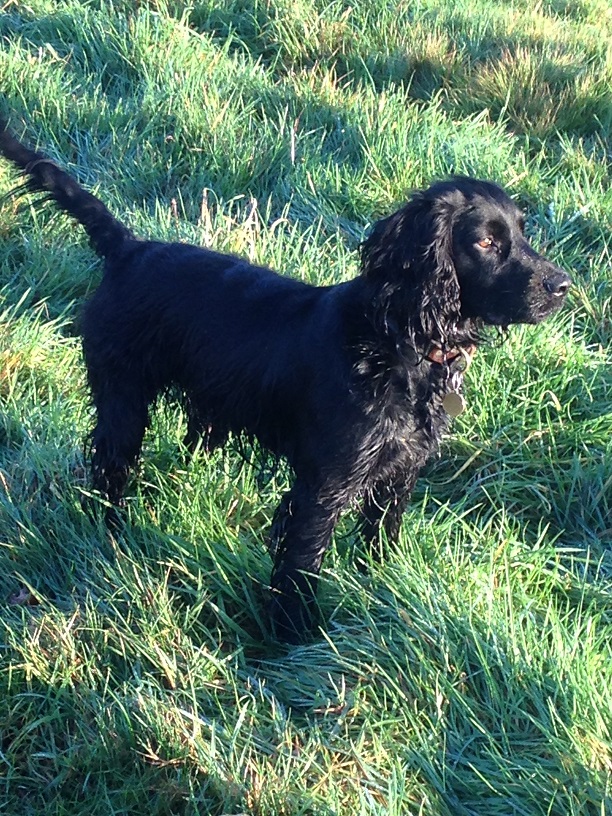 In June 2016 Enzo was brought to us with a sudden onset of reluctance to move. He was hunched and uncomfortable and appeared to be painful when feeling his abdomen and lower back. There was no history of any topples or injuries/wounds and he was not showing signs of any stomach upsets.

Enzo was provided with plenty of pain relief and had a thorough work up to try to discover the source of his pain but frustratingly it remained a mystery. The only clue was that, during his recovery, Enzo started to show discomfort with using his right hind leg.

Time went by and Enzo quickly got back to his normal, energetic self until November when he started to show similar signs of discomfort. His right hind limb lameness was back and he was reacting strongly to other dogs going near his back and hind limbs. After a few days a subtle swelling started to appear over Enzo’s right hip region and over time this developed into a discharging, bald skin lump which Enzo began to lick.

Again Enzo was admitted for some investigations which included biopsies of the swelling and bacterial culture of the discharge. An anxious wait followed during which time we kept Enzo comfortable and treated a suspected secondary infection of the lump. Thankfully results showed the swelling to be related to an inflammatory reaction but the question was to what?

Being a spaniel, Enzo typically has a lot of hair and with his inquisitive nature he is often rooting around in the bushes and undergrowth. There was a suspicion that during one of his forays a grass seed may have got attached to his coat, punctured his skin and found its way into his body. Grass seeds are well known culprits for causing signs of unexplained pain, soft tissue inflammation and sometime intermittent high temperatures.

We hoped that the swelling and lump on Enzo’s side was giving us a clue on where to look for an offending foreign body. Having treated the secondary infection Enzo was booked for surgery to remove the lump and surrounding tissues with plenty of margin of healthy tissue in the hope that a foreign body would be lurking somewhere within.

Under a general anaesthetic the lump was dissected out and an associated tract followed down to Enzo’s body wall before being removed. Examining the removed section of tissue afterwards a grass seed was indeed found which had likely journeyed from Enzo’s groin, through his abdominal muscles and the muscles of his back, to arrive at the level of his hip. 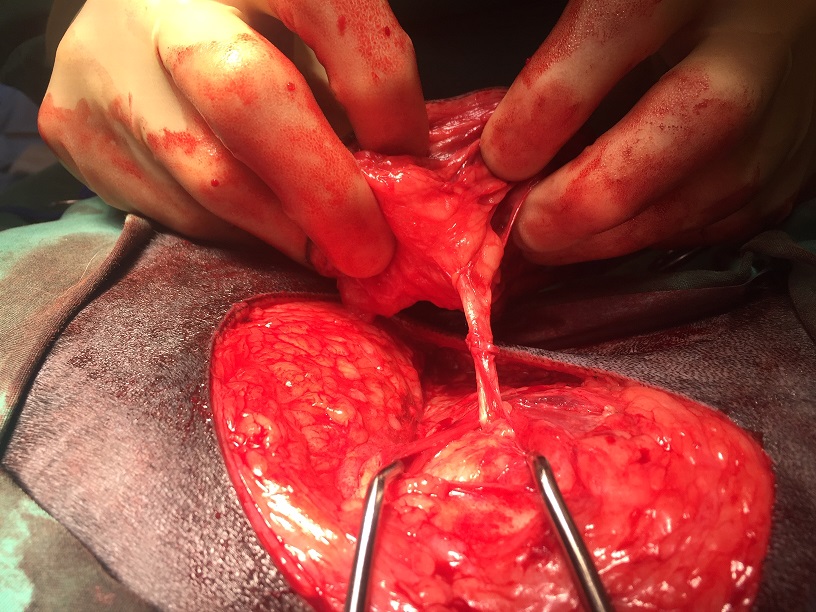 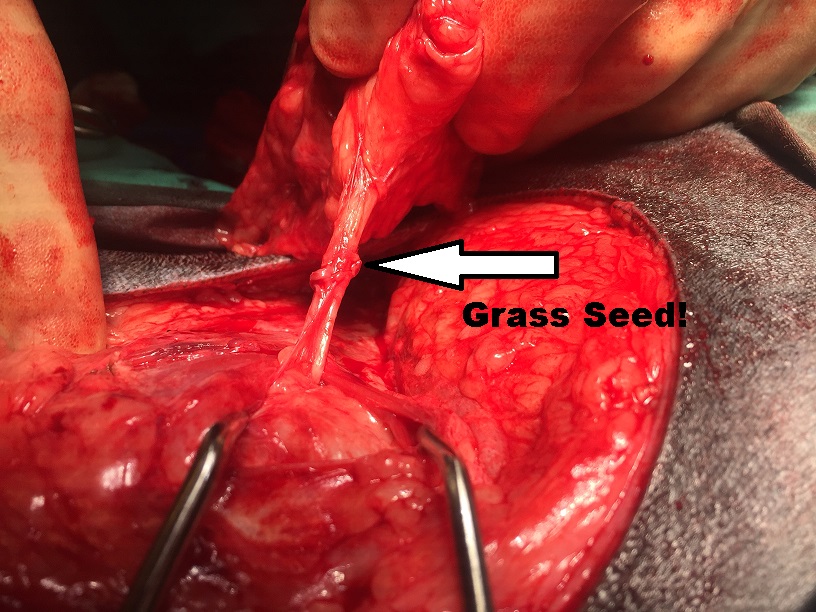 After a short period of recovery Enzo is now back to charging around comfortably again with no signs of discomfort or lameness. It is amazing to think that such a tiny, apparently harmless, thing as a grass seed can cause so much trouble. 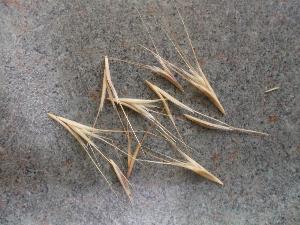 If your dogs has a long or fluffy coat and is prone to picking up grass seeds in the Summer and Autumn it is always worth checking their coat, ears and skin after a walk and removing any seeds.

Taking them to a dog groomers may also be worthwhile to shorten the hair on the feet and belly areas where the seeds are particularly likely to attach. If you ever see small blisters or a draining hole in a paw such as the photo above then do get it checked by a Vet!