Well it's been an exciting couple of weeks!  Read on to hear the fantastic story of Jet, her emergency caesarian and a happy ending!  How many pups can  you count?

Jet is a slim, very healthy two year old female Labrador. With impeccable manners and no issues with Hip and Elbow Dysplasia and a perfect eye score her owners made the very easy decision to breed from her. A husband was chosen and during the middle week of her season she mated twice. We were all thrilled at the practice to confirm pregnancy with an ultrasound scan 25 days later! 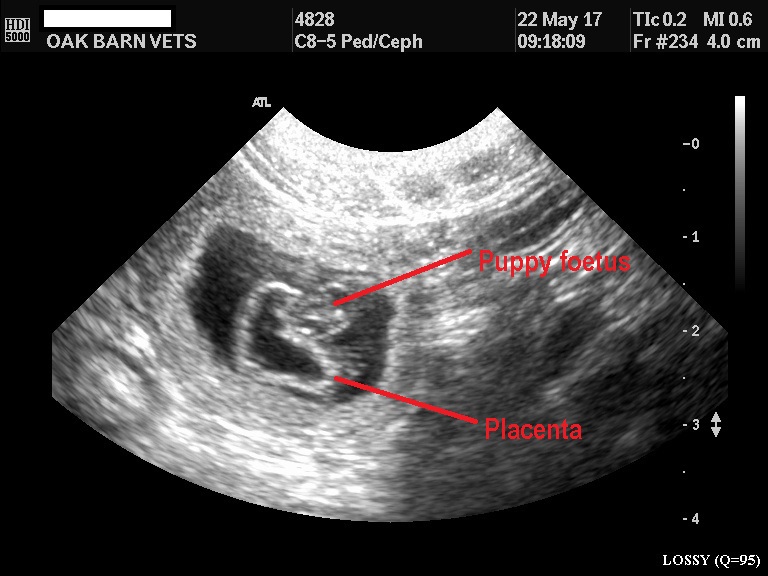 Pregnancy in the female dog lasts on average for 63 days but can vary from 56 to 72 days. Litter sizes can range from 1 puppy in miniature breeds to over 15 in giant breeds! Although it is very difficult to give an accurate idea of puppy numbers at ultrasound scan we are mainly concerned if there is just a single giant pup.

With multiple puppies (foeti) seen on scan all was good. Jet was up to date with her vaccinations and parasite control. Fit and slim, no changes were made to her diet and she continued to exercise throughout her pregnancy.

Sailing through a perfect pregnancy, Jet had no issues. Her mammary glands started to fill and milk production began as she neared 65 days. With some restless behaviour and a drop in appetite we knew that whelping was imminent.

During first stage labour, uterine contractions begin. Restless behaviour increases and nesting starts. This preparatory stage normally lasts between 6 and 12 hours before the bitch progresses to the second stage of labour.

In the second stage, the uterine contractions increase in intensity and abdominal straining begins, foetal fluids are passed and a puppy is expelled. The third stage refers to the expulsion of the placenta and afterbirth. Each pup may not be followed by afterbirth; the mother may pass two pups and then two placentas.

Normally you would expect one pup on average every 45 to 60 minutes (varies from 5 to 120 minutes) with 10 to 30 minutes of hard straining.

As expected Jet had her first pup without issues, however her owners sensibly were concerned when within the hour she was straining and straining but not passing anything. On examination Louise found that Jet was bright and there were no issues with the first healthy large pup who had already enjoyed a good suckle. However on vaginal examination two back legs and a tail could be felt. Jet was still contracting strongly but even with our help this pup was wedged fast and not moving. 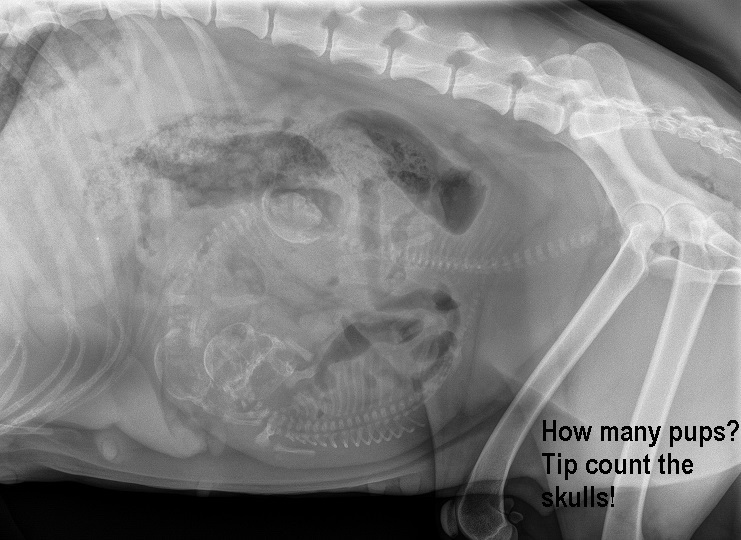 Despite it being a busy Monday morning at the Barn everyone dropped everything and Jet was rushed in for an emergency caesarean. An x-ray confirmed three pups were remaining, occasionally we will see the odd bitch mid labour that has run out of energy and contractions fail. An injection of a drug called Oxytocin often helps with contractions and further pups can be delivered without surgery. However in Jet’s instance the poor girl was trying as hard as she could but this pup would not budge! Coming backwards, upside down and a considerable size there was no choice but to move to surgery.

Emergency caesareans do carry risks to the mother and pups. A large gravid uterus full of puppies puts enormous strain on the mother’s cardiovascular system and all anaesthetics suppress breathing and heart rate to a certain degree; so we had to take great care with her anaesthetic. In addition lots of drugs that would routinely be given during an anaesthetic can harm the puppies via placental circulation so these need to be avoided. Equally time is of the essence – once second stage labour has been reached all the puppies placentas will be starting to come away from the uterine wall and as that happens their blood and oxygen supply from the mother is lost and they will die.

With great care Jet was anaesthetised and emergency surgery via an abdominal incision was performed. Thanks to our great nurses and vets Jet had no issues with the anaesthetic and three healthy robust puppies were brought into the world. Even our receptionists helped with all hands on deck, a team to resuscitate puppies and a separate surgical team to look after Jet it was a real Oak Barn team effort! Thanks to everyone’s hard work, things thankfully went very smoothly.

During recovery all pups began feeding well and shortly afterwards Jet and her brood were safe at home. We are pleased to report that family Jet are all doing incredibly well and even though the pups tried to suckle on her stitches (despite Andrew hiding them all under the skin!) Jet has fully recovered and is already enjoying her walks again (and a brief break from four ravenous Labrador pups!). A very happy case of the month story all round! 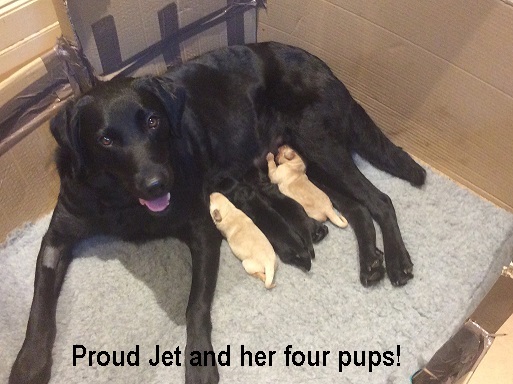 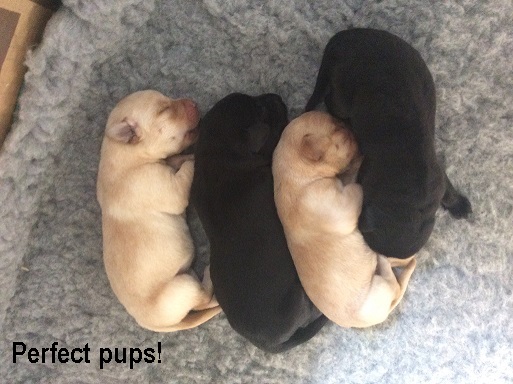