As you can see Jack is rather handsome. He is an 8 year old German Shepherd cross Golden Retriever who enjoys an active life including chasing rabbits, long walks and accompanying his owner out riding.

He was brought to see us because his owner had noticed that when he was walking his hind legs had become increasingly weak and uncoordinated. He was also showing signs of back pain in his lower back. Other clues during examination indicated that his nerve supply to the hind legs was affected - his nails were scuffed and he had slow paw placement (known as proprioception).
Unfortunately since Jack showed no sign of improvement after a short period of anti-inflammatory painkillers and rest we knew we needed to get to the bottom of his problem. Xray imaging was the next step. Large breed dogs (especially German Shepherd Dogs) are prone to a number of conditions that can cause hind leg weakness and back pain. It was really important that we identify the cause of these signs in Jack so that he could be given the most appropriate treatment. 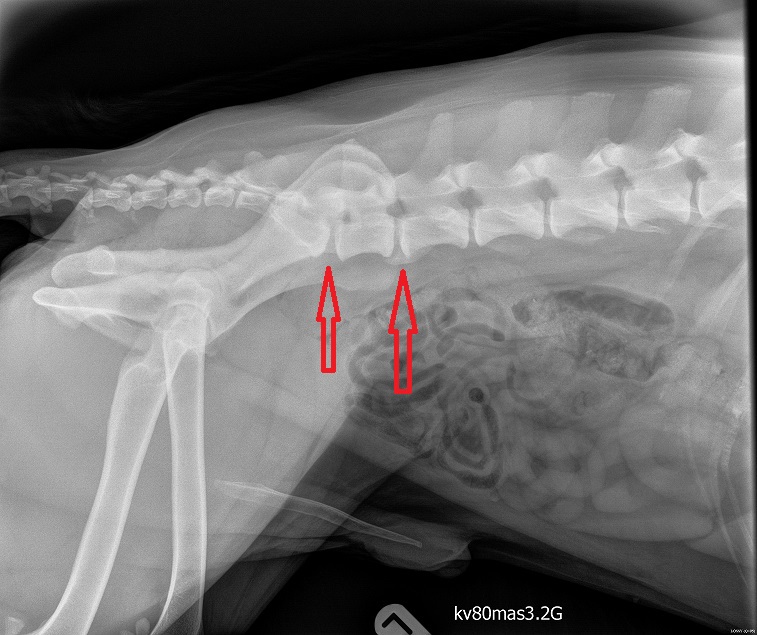 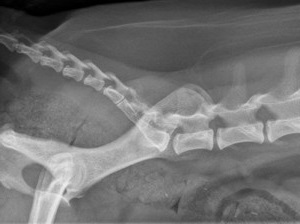 The X-ray shows signs suggestive of degenerative lumbosacral stenosis (DLSS), which is effectively a narrowing of the vertebral canal in the lower back - highlighted with the red arrows. The narrowing causes spinal cord compression which is both painful and results in coordination and weakness in the hind legs (this is known as ‘cauda equina’ syndrome). You can compare this with a radiograph of a normal dog's spine here in the picture to the left.

Following appraisal of his X-rays, Jack was referred to our colleagues at the neurology department in Fitzpatrick Referrals for further investigations including an MRI scan. This provided an accurate 3D image of his lower back and confirmed our diagnostic suspicions of DLSS.

Jack has received an epidural injection of a long acting corticosteroid in combination with two types of oral painkillers. We are extremely encouraged that Jack’s initial progress has been hugely positive. We are keeping our fingers and paws crossed that Jack will continue to respond well to medical management, but we are comforted that if he relapses he would be a good candidate for spinal surgery. In the meantime, he’s back to chasing rabbits and going out on rides.