Bailey with his burst gall bladder is our amazing case of the month for April.   He really shouldn't have survived but in true labrador style is going strong!  Read his story below.

Bailey is a typical lovable 6 year old labrador - effectively a stomach on legs!  Full of life and always loving his food, his owners were understandably a bit worried when he vomited a few times overnight and then refused breakfast.  By lunchtime though, he was brighter and keen to eat some bland food.  Alarmingly after gobbling his lunch he suddenly seemed incredibly painful and collapsed.

Sensibly his owners rushed him straight to the Barn by which time he was up and about and although tender with his abdomen seemed much better.   His temperature was normal and well hydrated with no issues on chest auscultation.   Pain relief and some anti-nausea drugs returned him to his normal bouncy labrador self, but given the odd collapse episode he was kept in for further observation.

All was good until his next bland meal - again after gobbling with gusto he was incredibly painful, crying out and unable to stand.  This time, as he was at the Barn, he was immediately ultrasound scanned.  This revealed free fluid within the abdomen - either he was bleeding or free fluid was leaking from somewhere and he had peritonitits.  His liver and spleen looked normal but he had an enormous gall bladder and the bile tracts in the liver were also enlarged.  With no evidence of a mass or cause for bleeding the top differential was bile peritonitis. 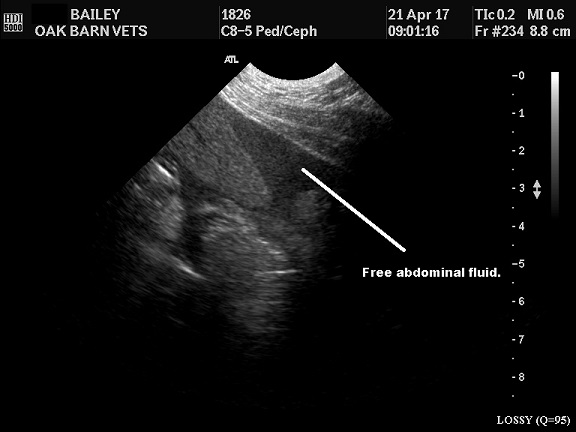 The abdomen normally contains a small amount of fluid to act as a lubricant, so the loops of bowel can slip past each other during perilstalis.  Large amounts of free fluid give us great cause for concern. Peritonitis or abfominal haemorrage are both life threatening.

Despite further pain relief Bailey was still in agony, emergency intravenous fluids were given and on discussion with his owners he was rushed to surgery.

The gall bladder is a small sac located within the liver that stores bile produced by the liver.  It is designed to store the bile fluids until a meal is ingested.  At this point the gall bladder will contract and empty the bile into the small intestine.  This helps break down fat for digestion and helps with excretion of waste products the liver does not need (this is why faeces are brown).

As you can imagine free bile floating around in your abdomen is incredibly painful but also often contains lots of bacteria.  Even in referral hospitals mortality rates of 50% can be seen with bile peritonitis.

At surgery our worst fears were confirmed.  Poor Bailey had a ruptured gall bladder.  Samples of bile from the gall bladder and the abdomen where taken for analysis.  A large gall stone was lodged in his bile duct.  Very carefully a cholecystectomy was performed - this involves removing the gall bladder and cystic duct but being very careful not to remove or damage the common bile duct or pancreatic duct. 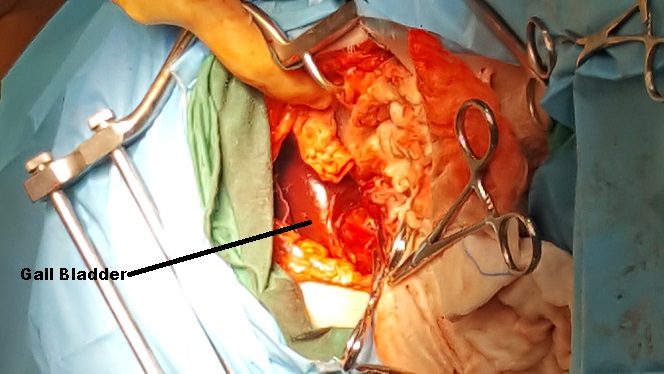 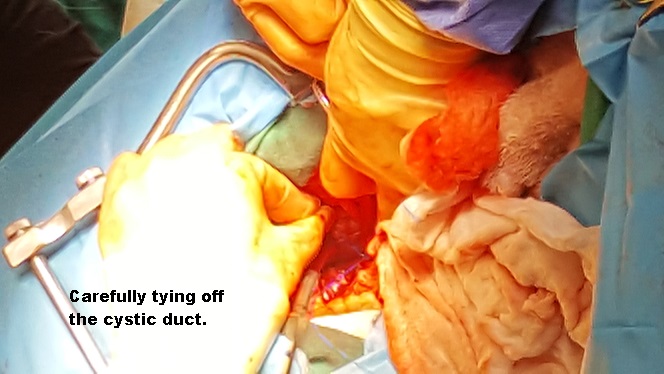 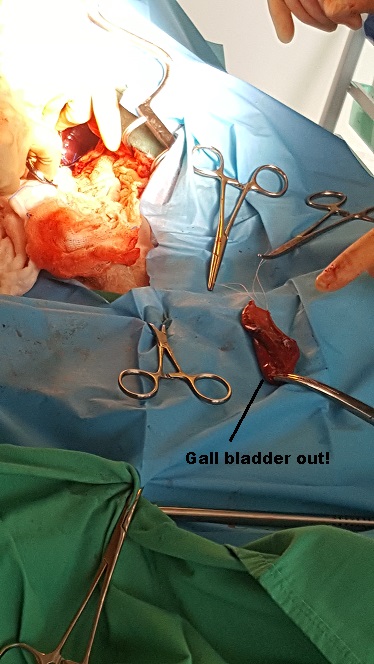 If either of these were damaged Bailey would not survive.  After a nervous couple of hours Louise and Betty were happy that the gall bladder, cystic duct and offending gall stone were removed.  The abdomen was flushed with copious amounts of sterile saline to flush as much bile and possible bacteria out as possible.  Bailey was already on high levels of combination antibiotics and pain relief via his drip.  His abdomen was closed up and he recovered amazingly well considering his lengthy anaesthetic.

A nervous 48 hours ensued.   Culture results of the bile revealed that Bailey had a septic bile peritonitis containing a whopping three different types of bacteria, some with multiple resistances.  Despite this his combo antibiotics worked well and within a day he was up and being hand fed, by day two he was demanding food and by day three back to his usual ways!  The labrador stomach can't be kept down for long!

Bailey is still on antibiotics and we are monitoring his liver and oddly blood clotting parameters very carefully.  Bile and the associated bacteria can survive for a long time in the abdomen so he is on a six week course as a minimum of combination antibiotics.

Now he doesn't have a gall bladder he must eat a special diet.  The liver is still producing bile which constantly is trickling into his small bowel but he does not have the facility to contract and release alot of bile in one go.  Therefore it is harder for him to digest fats.  Oddly as a result of this he may also develop blood clotting issues as Vitamin K, vital for blood clotting, is a fat soluble vitamin and he may struggle to maintain effective levels.

Despite all this his sutures have been removed and he bounced in this week for his 4 week post surgery blood samples.  Very waggy and keen to see us despite everything.  And best of all his blood test results are still normal!  Fingers crossed at six weeks we will sign him off and he can show off to his doggy friends that he is in a very small population of dogs to survive and thrive despite missing a gall bladder!

And here it is - Bailey's gall stone was a whopping 7mm in diameter - ouch! 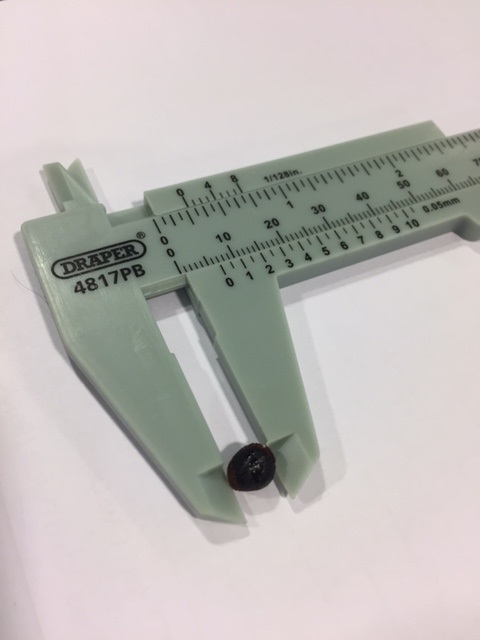