Bing is an 8 year old Siamese cat who loves nothing more than a day filled with adventures followed by an evening of fussing.  Unfortunately his exploring instincts landed him in trouble recently when he was hit by a car whilst dashing across the country lane near where he lives. Thankfully his owners were quickly on the scene and rushed him over to Oak Barn Vets for treatment.

Like any emergency patient, road traffic injuries need to be dealt with in a calm and methodical way to ensure that life threatening conditions are not missed. It is easy to be distracted by obviously broken limbs or superficial wounds but these often represent no immediate danger to the patient whereas hidden injuries from head, chest or abdominal trauma can.

On examination by Heilin, Bing was found to be conscious with no signs consistent with head trauma, his breathing and heart rate were elevated but lung and heart sounds clear. There was no obvious abdominal pain and his bladder could be felt but he had difficulty moving his back legs. His pelvis felt unstable but no nerve loss was found suggesting spinal damage, he was however at risk of going into shock. High level pain relief with methadone and intra-venous fluid therapy was started straight away by Heilin and Bing was given oxygen.

Once stabilised and comfortable, x-rays were taken of Bing’s chest, spine, abdomen and pelvis to give more detail of his injuries. The chest x-rays showed signs consistent with an early pneumothorax but there were no rib fractures or obvious internal bleeding.  He had a fractured pelvis but at this stage so soon after his massive trauma the pelvic fractures, although painful were not life-threatening.

Pneumothorax is a potentially serious condition where air is trapped in the space between the lungs and the chest wall (pleural cavity) stopping the lungs from expanding normally. This air can come from a leak in the lung or airway or from a hole into the chest cavity.  It is a common injury after a hard blow to the chest with the blunt force being enough to tear a small hole in the delicate lung tissue that then leaks every time they breathe in.

Bing's images below at the time of admission show small amounts of free air within his chest (red line pointing to heart position - this will be important as this tale unfolds!) (red lines on pelvic picture show multiple fracture sites) 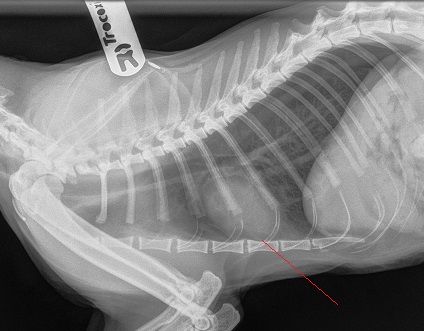 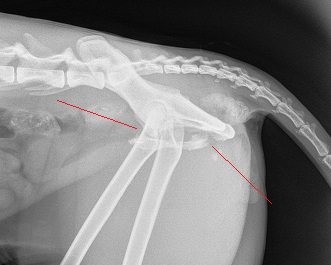 Given that Bing did not have any obvious chest wounds it was likely that a section of his lung wall had ruptured due to the impact of his collision. The x-rays also showed fractures of Bing’s pelvis separating the attachments to the backbone as well as a fractured pubic bone.

Bing was kept in an oxygen cage and closely monitored to see if his pneumothorax was progressive. A shortness of breath and increase in breathing rate followed by a repeat chest x-ray showed that there was an ongoing leak of air from Bing’s lungs so air was carefully drained by Louise from Bing’s chest using a needle catheter in a procedure called thoracocentesis.

To see the progression and resolution of the free air just monitor his heart position by looking at the distance from the chest wall - red line indicates. 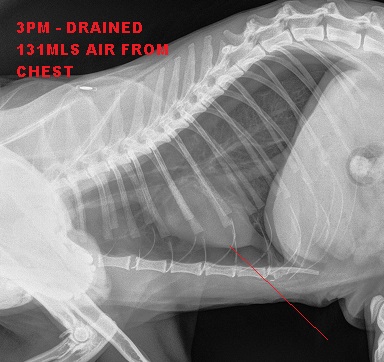 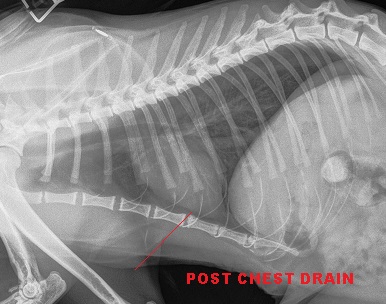 This quickly helped Bing to breathe more easily but over the following 24 hrs the procedure had to be repeated suggesting the leak was ongoing. Bing was sedated and Andrew placed a wire-guided chest drain (blue lines) to allow regular, safe drainage of air from Bing’s chest cavity over the coming days. 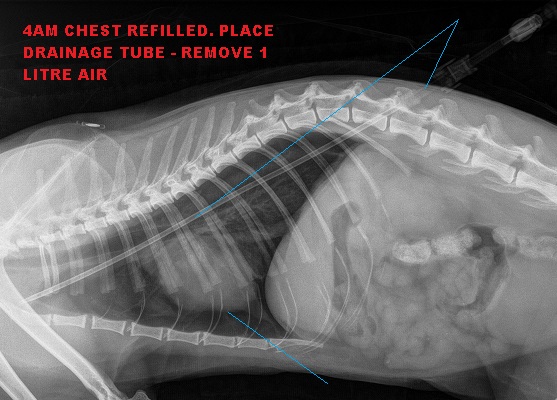 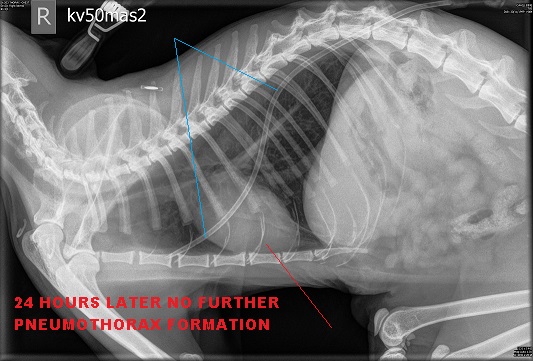 There was also some concern regarding the level of bruising around Bing’s pubic region so a urinary catheter was placed to allow comfortable drainage of urine from Bing’s bladder as well as aiding the healing of any damage to his urethra.

Over the following days, careful nursing from our fab team kept Bing comfortable and out of danger and we were able to remove his chest drain and urinary catheter. Bing needed help initially to eat and toilet but soon got the hang of things and we were able to send him home.  Here he was on strict crate rest with his owners doing a brilliant nursing job whilst he continued to recover. 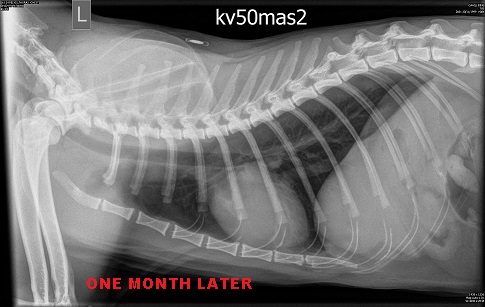 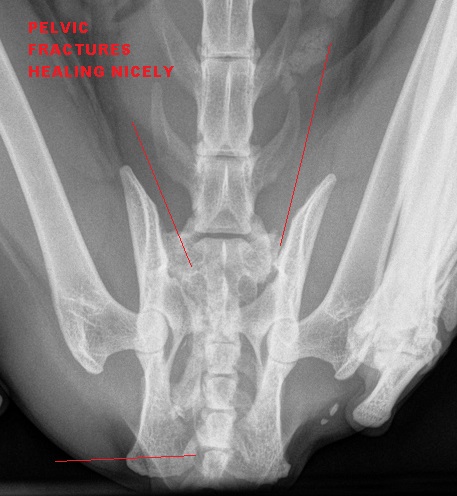 Bing made such good progress with his mobility over the next 2 weeks, he was able to get up and use a litter tray without assistance.  Given he was doing so well it was decided to allow his pelvis to heal without surgery, although this means he now has a bit of a wiggle after 8 weeks rest he is back outside, enjoying life and doing brilliantly.

A great happy ending after a mamouth team effort all round! 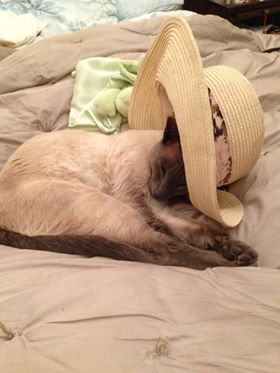 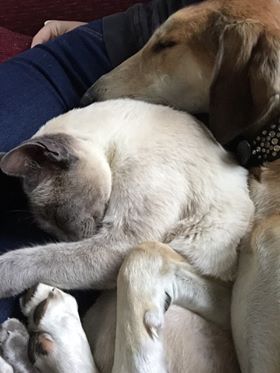