Douglas is a lovely Dalmatian. Most people think of Dalmatians being spotty, bouncy and a little bit bonkers! Douglas is all of these (in the nicest possible way!) but he also has another trait encountered by many male Dalmatians, he makes bladder stones!

Sadly this is a common genetic pitfall of Dalmatians.  Many are prone to this problem due to a glitch in the way they process salts excreted in their urine.  Thankfully now this is avoidable through genetic testing in breed health schemes.

Dalmatians are prone to forming a particular kind of bladder stone called a urate stone.  Here are Douglas' stones shortly after removal. 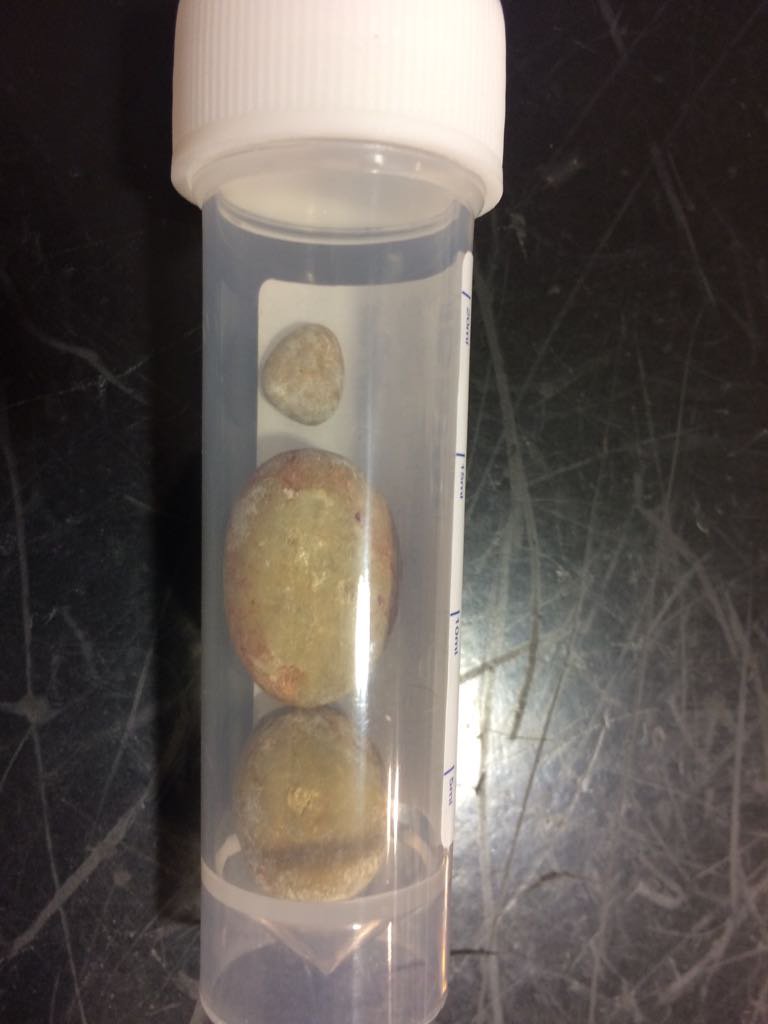 Similar to the stones formed by human gout sufferers, urate crystals result from a concentration of uric acid in the bladder, which then gather together to form one or several stones. Urate stones cannot be seen clearly on x-rays so are often diagnosed by ultrasound exam of the bladder as was the case with Douglas.

Sadly diagnosing Douglas with bladder stones was nothing new for Douglas’ owner as he had been previously referred in 2014 to a specialist Veterinary hospital for diagnosis and surgery to remove urate stones from his bladder. Douglas had then spent several weeks recovering from his abdominal surgery which involved a large abdominal wound for a cystotomy to open his bladder and remove the accumulated stones.

Despite ensuring Douglas drank plenty of water and limiting his intake of high protein foods new stones had gradually started to form again in his bladder getting larger over time, so when he came to Oak Barn Vets for a second opinion with signs of abdominal discomfort, problems urinating and blood in his urine Louise was concerned that the stones were back. A prompt ultrasound examination of Douglas’ bladder showed the presence of several stones, presumed to be made of urate. 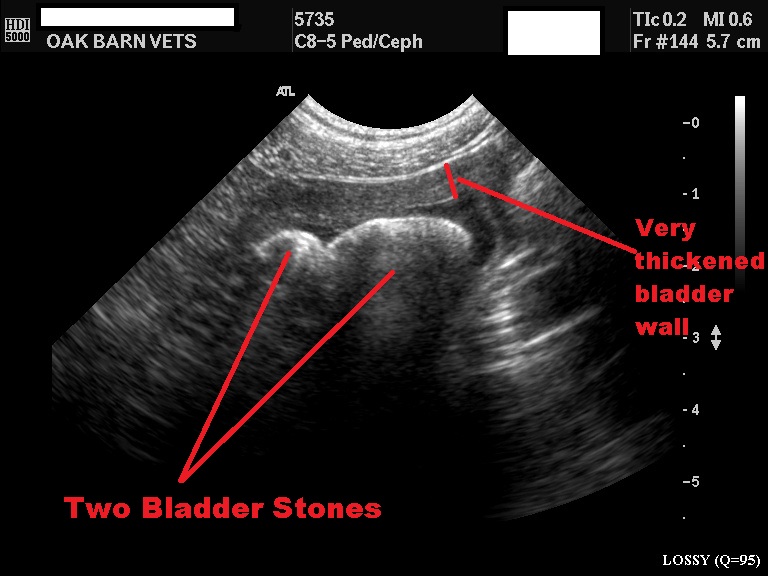 Some bladder stones can be dissolved whilst still in the bladder with special diet modification and some small stones can be flushed out with a catheter but sadly large urate stones can only be treated by surgical removal.

Due to Douglas’ previous surgery and a prolonged recovery we were keen to avoid a big uncomfortable wound so using some cunning keyhole surgery Andrew was able to remove the stones from Douglas’ bladder through a small incision. This procedure is called a laparoscopic assisted cystotomy and gave a great view of the interior of the bladder and the offending stones which could then be removed with long forceps. The picture below was taken during a similar procedure and is courtesy of the Canadian Veterinary Journal.

Two large and one slightly smaller urate stones were removed from Douglas’ bladder before the bladder wall was repaired and the keyhole ports were closed. Douglas went home later that evening as he was very comfortable and urinating well. Given his wounds were so small and comfortable Douglas had a quick return to his normal bouncy character and still loves coming in to say hello.

The bladder stones were sent to America for analysis by a specialist laboratory and were confirmed as 100% urate stones. 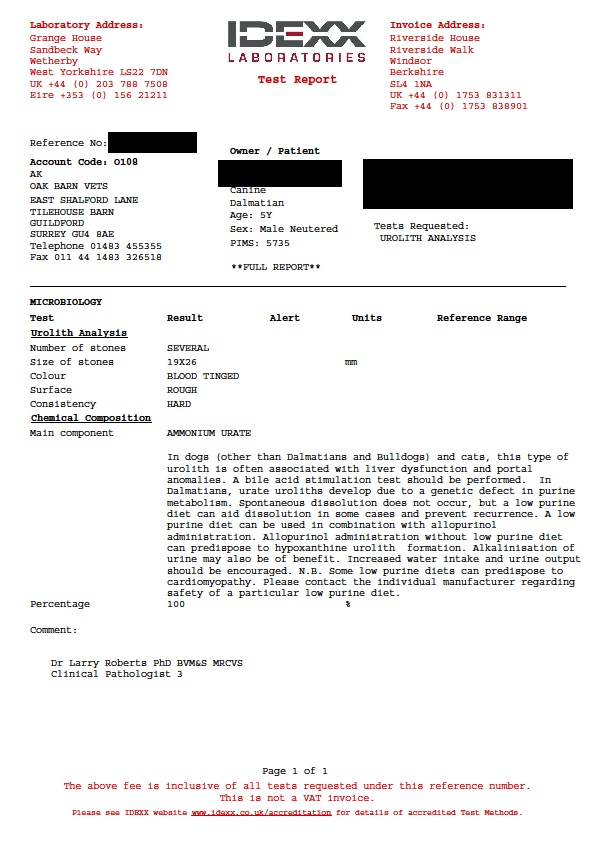 A low purine diet was prescribed, which is a diet with reduced levels of a specific form of protein which contributes to stone formation. So far Douglas is free of bladder stones but we will be monitoring him closely and using medication if needed to try to prevent new ones from forming.

We are very pleased to report that Douglas has positively bounced back post surgery!  Here he is on his first walk after his op and I think we'd all agree he looks pretty happy! 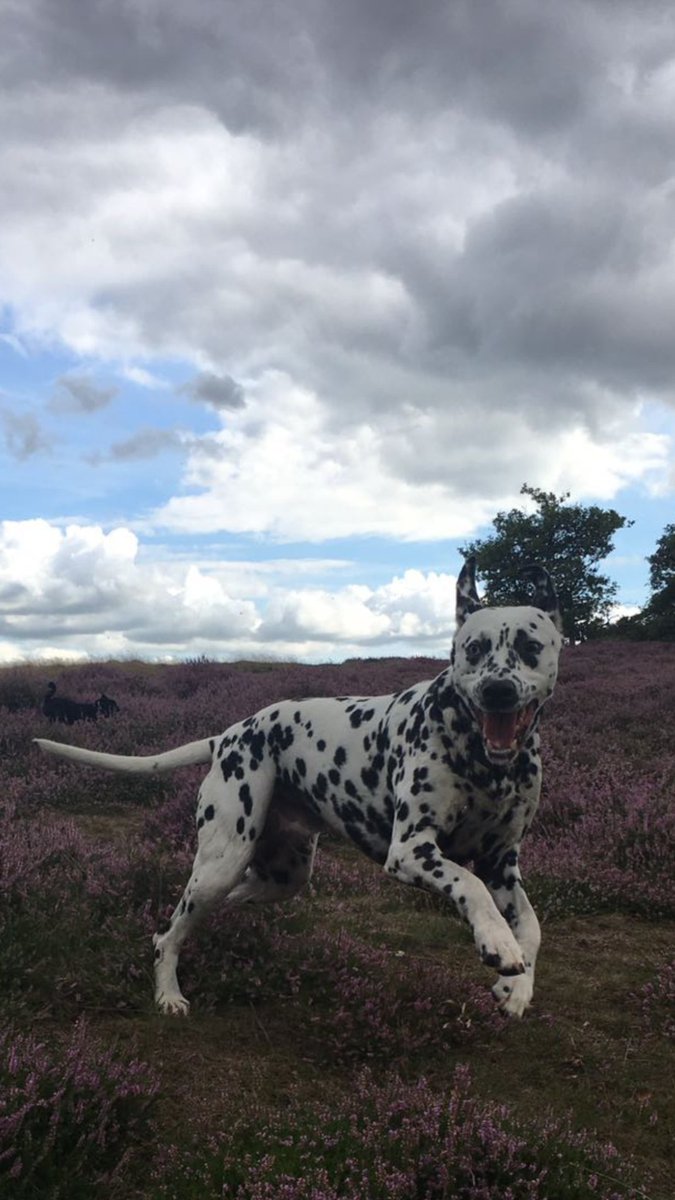