Who wouldn’t like to be irresistible? To attract the attention of the opposite sex wherever you go, whatever you do?

Sounds great to begin with but for a young, female labrador called Cerrie being irresistible was getting a bit boring. She had her first season as expected at around 7 months of age but instead of her appeal dropping off a few weeks later and everything returning to normal Cerrie’s hormones continued to keep her in season.

The reproductive cycle in bitches typically occurs every 6 months when they have enlargement of their external genitalia, a bloody discharge which steadily decreases and then at the end of this period they ovulate and look to find a mate. If they are not mated and become pregnant then often the bitch will shows signs of a “false pregnancy” (pseudopregnancy) occurring several weeks after their season. This is due to similar hormone levels to that which would occur during pregnancy and they may show changes in their behaviour such as a loss of appetite, nesting and lethargy. 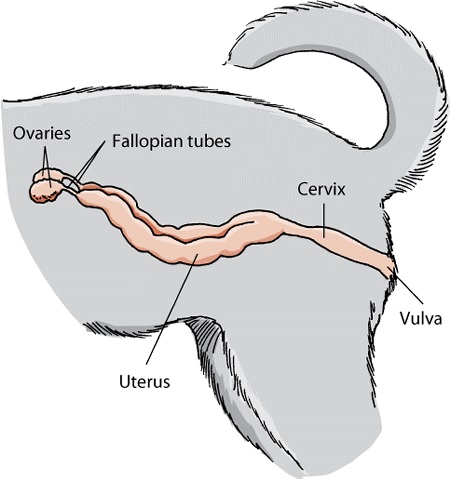 The stages of the reproductive cycle in the bitch are controlled by alterations in hormone levels of the sex hormones, predominantly oestrogen and progesterone. An-oestrus is the period between seasons, normally lasting several months. Pro-oestrus is considered to be the start of a season when the reproductive tract becomes active, ovarian follicles form containing individual eggs to be released and oestrus is the short window when the eggs are released and the bitch looks for a mate.

During pro-oestrus and especially oestrus pheromones released by a bitch will attract males from a great distance due to a dog’s amazing sense of smell. Sadly this meant that Cerrie was constantly being bothered by male dogs whenever she left the house with a little trail of interested boys following behind her. After this had gone on for a few weeks and there was no sign of Cerrie’s season coming to an end her owner became concerned and brought her to Oak Barn Vets.

Cerrie always loves to visit us as she knows that there are plenty of treats and fuss on offer and she was more than happy to be examined. It soon became obvious that after several weeks she was still showing all the signs of a bitch “on-heat” with the added complication of an infection of her vagina due to her ongoing discharge.

Cerrie’s infection was treated and she was booked for an ultrasound examination to look for the cause of her persistent oestrus. The most likely possible causes were an ovarian cyst or tumour so we needed to have a closer look at what Cerie’s ovaries were up to. Small patches of hair were clipped from her sides and with her owner holding her Cerrie was as good as gold while we performed an ultrasound examination. Sure enough a large fluid filled cyst was found on Cerrie’s right ovary measuring 257mm! Thankfully the rest of her reproductive tract was found to be normal and healthy. One of the follicles containing an egg on one of Cerrie’s ovaries had failed to rupture and instead steadily increased in size filling with more and more fluid. This follicle had then become a cyst and caused Cerrie to remain in oestrus. 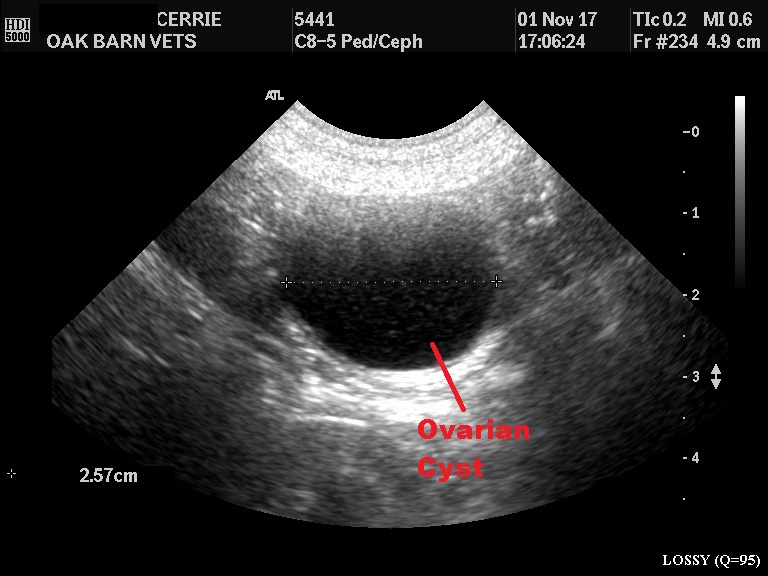 Various options were discussed on how to manage Cerrie’s cyst as there are reports of using various human treatments to encourage the cyst to rupture and end Cerrie’s season however there was a high chance that the cyst would regrow at the next season. Cerrie’s owner had decided not to breed from her so she was booked to have an ovariectomy (neutering procedure).

At Oak Barn Vets routine neutering of bitches is performed via keyhole surgery (laparoscopy) so this was the perfect opportunity to remove Cerrie’s ovarian cyst through a small incision giving her a short and comfortable recovery from her surgery. After a routine blood test confirmed that she was fit and well Cerrie's surgery was performed under a general anaesthetic and was quick and without any complication. After removal, both of Cerrie’s ovaries were sent to the laboratory to ensure that there was no underlying malignancy causing the ovarian cyst and Cerrie was allowed to go home to enjoy a few days of rest; although keeping quiet is not her favourite past-time! 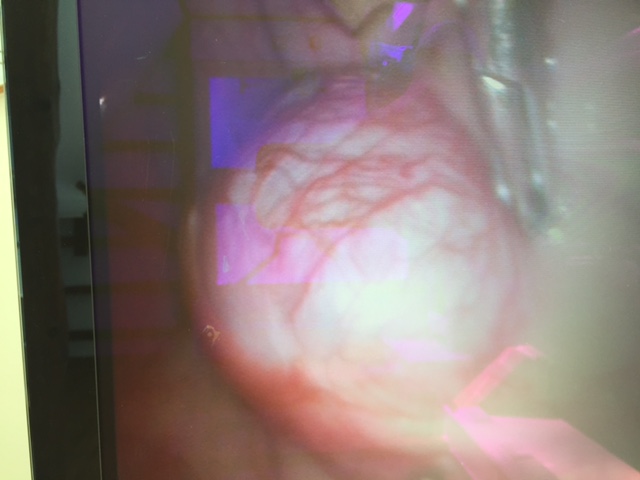 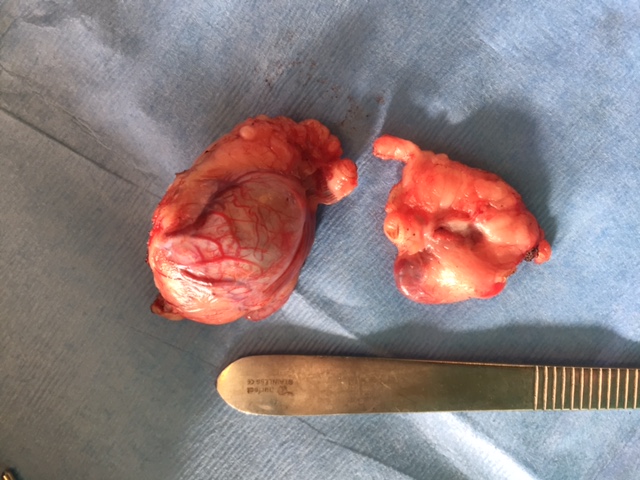 The lab confirmed that the fluid swelling was indeed a benign ovarian cyst and 24 hrs after surgery Cerrie was bouncing off the walls wanting to get back to her normal exercise. Over the following few weeks her hormone levels subsided and Cerrie started to feel more normal. Even better than that; she could once again walk down the street without attracting all the boys attentions. 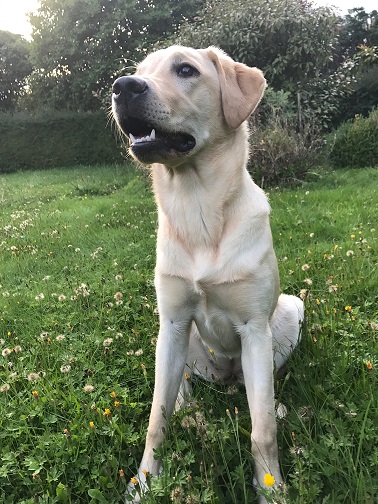