After several trips to her local out of hours hospital on the south coast Daisy’s symptoms were starting to become a bit of a mystery. One minute she would seem fine and up to her usual tricks and then suddenly, often after eating, she would be sick and drool with signs of discomfort and pain.

When we examined Daisy at Oak Barn Vets as a second opinion, she was recovering from aspiration pneumonia after repeated vomiting episodes had led to her inhaling some stomach contents. At this stage she was getting back to making a full recovery so it appeared that her problems had passed……or maybe not! 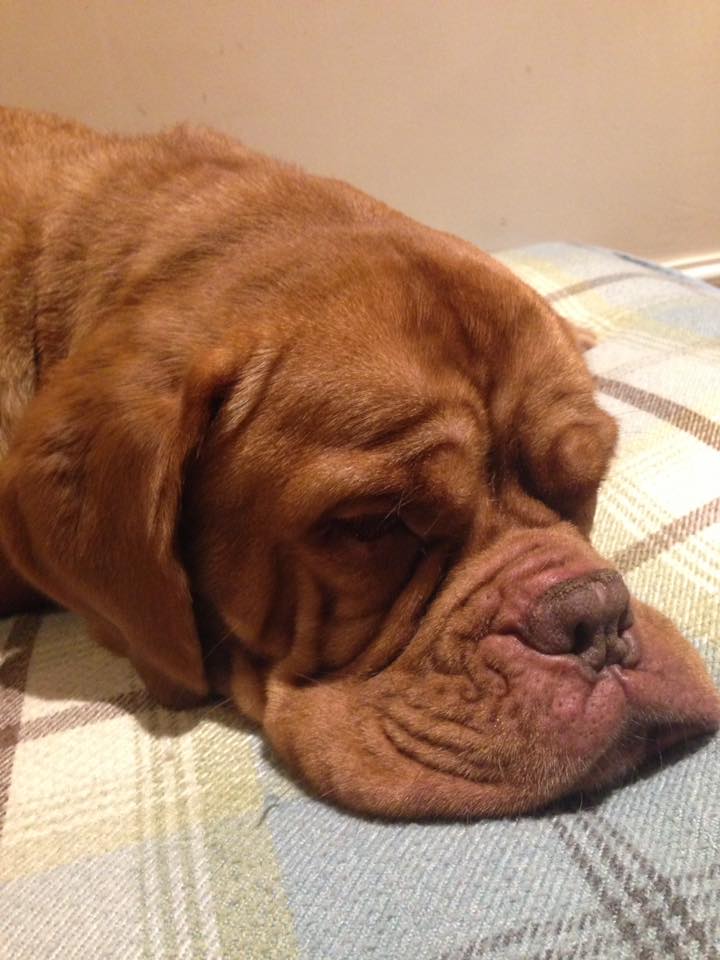 Daisy is a gentle giant, rescued from a charity by her owners, she lives with several other large breed dogs who have also had turbulent pasts. Up to now she had always been a healthy girl, although sometimes a little temperamental. Previous investigations, including abdominal ultrasound, had shown that Daisy had an enlarged spleen but biopsies had confirmed that there was no sign of a malignancy.

After a prolonged course of medications to reduce the strength of Daisy’s stomach acid, in case she was experiencing severe heartburn/oesophagitis, Daisy relapsed with her symptoms. It was decided to book her in at Oak Barn Vets for a thorough investigation.

Well it appears that Daisy couldn’t wait to get to the practice as a few days before she was due to come in Daisy’s symptoms returned worse than ever.

After a restless night Daisy and her owner were at the practice first thing for her to be admitted and get started.

It was obvious on examining Daisy that her spleen was indeed again very enlarged and uncomfortable and we suspected that she may be having what is termed a splenic torsion. The spleen is a large abdominal organ which acts as a reservoir and filter for blood as well as helping with the production of red and white blood cells. In dogs the spleen wraps around the stomach on the left side of the body and is attached by a series of ligaments and blood vessels. Dogs can survive quite happily having had their spleen removed, which can often be the case if it develops a tumour or ruptures and has to be taken out.

Daisy was stabilised with pain relief and intra-venous fluids while blood tests confirmed that she was fit for surgery. Once comfortable and anaesthetised Daisy underwent an exploratory surgery of her abdomen which indeed confirmed a splenic torsion. It became clear that Daisy’s twisted spleen had been developing slowly rather than as a sudden problem which is more often the case. Amazingly where blood vessels supplying Daisy’s spleen had become twisted and closed new vessels had grown around them to bypass the problem. 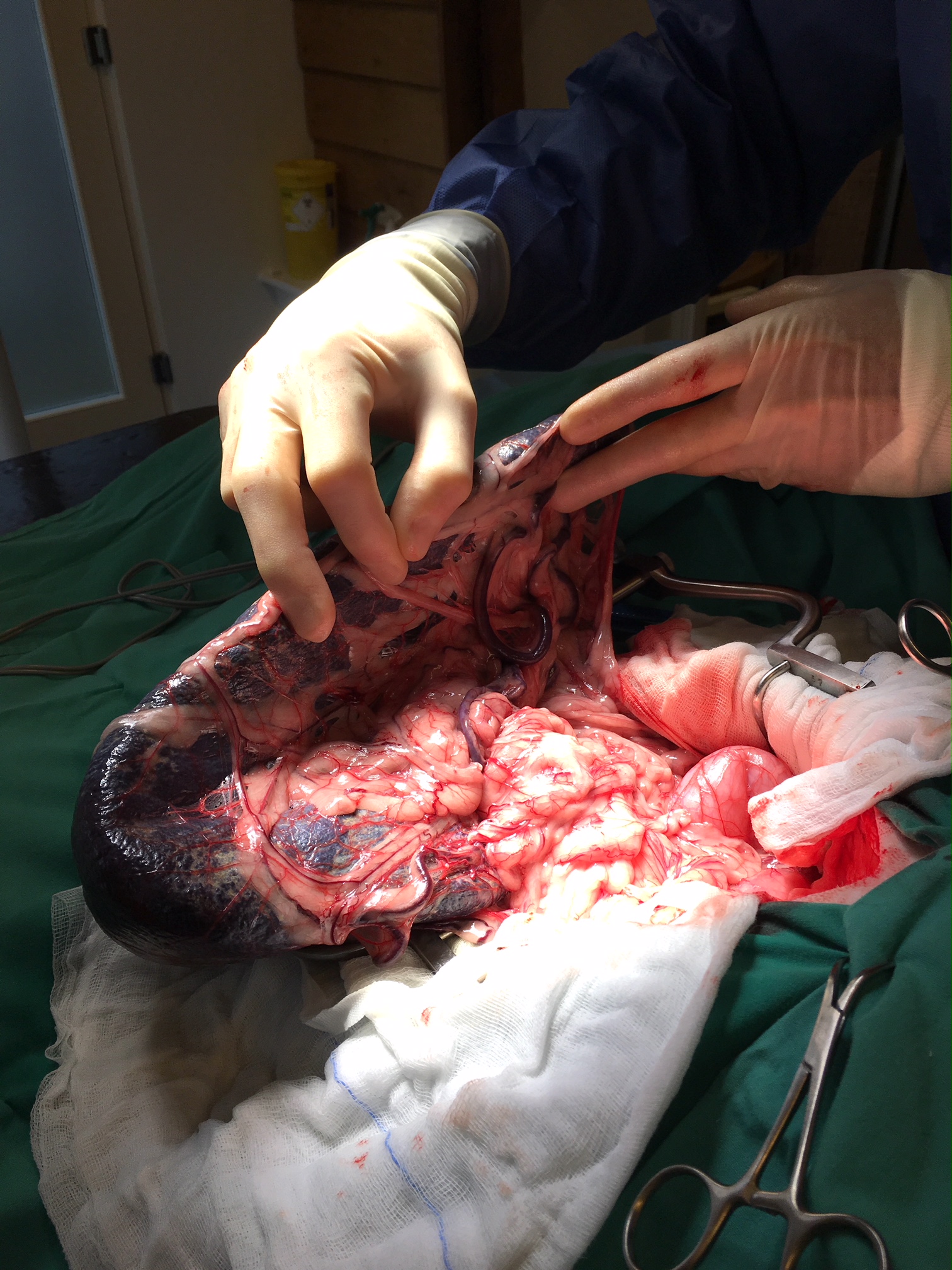 Once all the blood vessels leading to and from Daisy’s spleen had been sealed with ligatures, the spleen was removed along with its twisted stalk. No other abnormalities were found on examining the rest of Daisy’s abdomen and once she was all stitched closed she was transferred back to a cosy kennel to recover and be closely monitored. 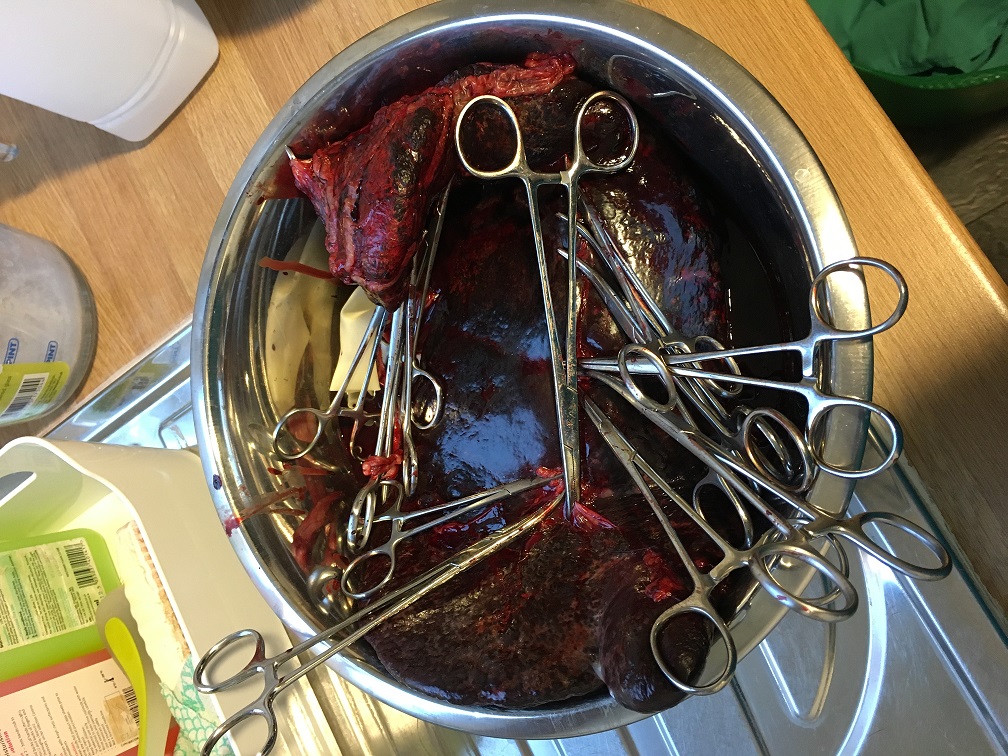 In true Daisy style she was up and about in a matter of minutes and keen for some breakfast, already feeling more comfortable and with an empty stomach to fill!

She was discharged that evening for a quiet couple of weeks at home before her stitches could be removed.

The pathology lab confirmed that Daisy’s spleen was definitely clear of any malignancy and had become enlarged due to twisting of the blood vessels draining the organ.

Since her surgery Daisy has not looked back and all her previous symptoms have gone. It was a relief to us and Daisy’s owners that we had finally got to the bottom of her symptoms and could get her back to full health and comfort.