And so it was, on a surprisingly sunny Sunday in May, that the team of Oak Barn Vets, a nine year old girl, and a collection of dogs took on the Muddy Dog Challenge in Windsor Great Park in aid of Battersea Dog and Cat’s home. 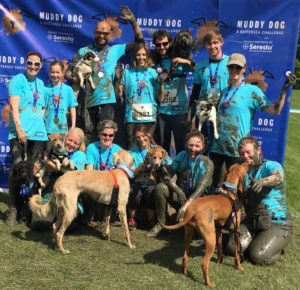 As the team prepared mentally for the rigours ahead and the dogs greeted each other with barks, bundles and the customary sniff, it soon became obvious that perhaps the greatest immediate danger would be sunburn!

Once registered, and with the precision of “One Man and His Dog” the team were herded into the warm-up “pen”, where Mr Motivator was on hand to get the blood pumping and the muscles limbered up for the adventure. It was then to the start line and a short jog down the hill to an oversized paddling pool filled with mud and an array of dirty cloths suspended at head height.

This set the tone for the 5kms ahead. Weaving along paths, through woods, up and down hills, across a pond all the time waiting to see what muddy man-made challenge lay ahead. In the main, and irrelevant of size, the dogs took it all in their stride (perhaps it’s because they’re all so well trained, or perhaps it was the fact that they were encouraged to get caked in mud for once). There was the occasional carry and refusal to jump in a “ball pit” but nothing that presented too much of a problem for the energetic four-legged pack.

The last obstacle was a no-go zone for the dogs, it was for owners only. Spectators were gathered around a muddy ditch about 15 meters across and with steep banks on either side. It had been churned into a particularly sticky bog. Many a shoe had been lost by previous participants, sucked to a gloopy grave. Crossing the waist deep hazard was hard work, especially for the youngest and smallest member of the team, with tired legs progress was slow and every step exaggerated in an attempt to get one foot at a time clear of the sludge.

Eventually all of the team made it to the other side and scrambled up the bank to collect their patiently waiting dog and sprint for the finish line for a medal, glass of water and a hose down in the dog/human wash station satisfied in knowing that through the teams effort and the generosity of all those that sponsored a grand total of £1400.00 and counting was raised for the charity. Our part in helping raise £191,400 for Battersea!

A huge thank you! There are lots of photos of our challenge , have a look and maybe a giggle or two!