This month’s “case of the month” is an unforgettable character. “Hardy” named after one of the comedic duo “Laurel and Hardy” is a happy go lucky pug!

He loves coming to see us at Oak Barn Vets and nearly turns himself inside out to have a bit of fuss and attention with the odd treat thrown in!

Hardy’s owners had noticed that he was becoming more and more itchy around his face and was repeatedly rubbing and scratching around his ears, eyes and muzzle. Hardy was examined a couple of times, his ears and mouth checked and he was prescribed anti-inflammatory medication and anti-histamines. His itchy face kept coming back but the cause remained a mystery. Unfortunately Hardy’s face rubbing led to him developing an eye ulcer, a common scenario in Pugs, where he had accidently scratched himself in his eye.

Although being a very friendly chap, Hardy is not always very co-operative with being examined (he is otherwise know at Mr Wiggle) so Hardy was admitted for examination of his eye. Whilst asleep we were able to have a good look at the rest of Hardy’s face and head which is always on the move when he is awake. 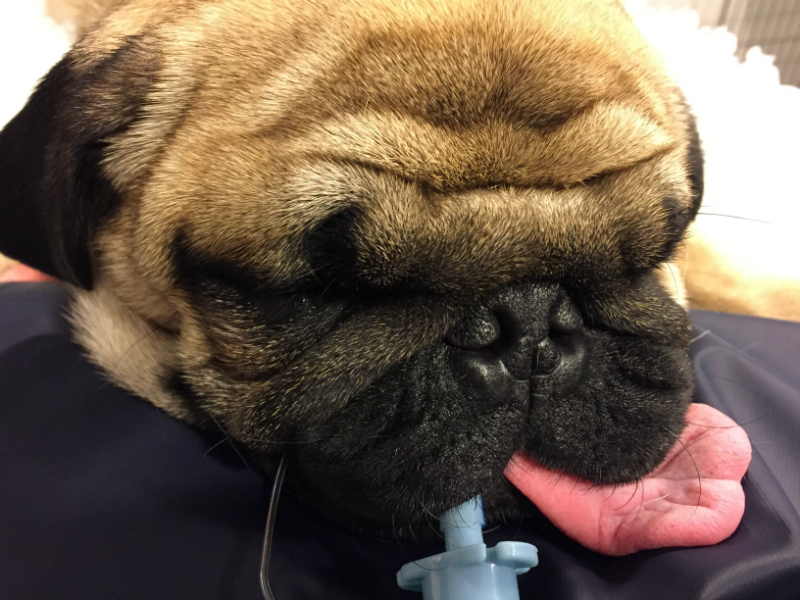 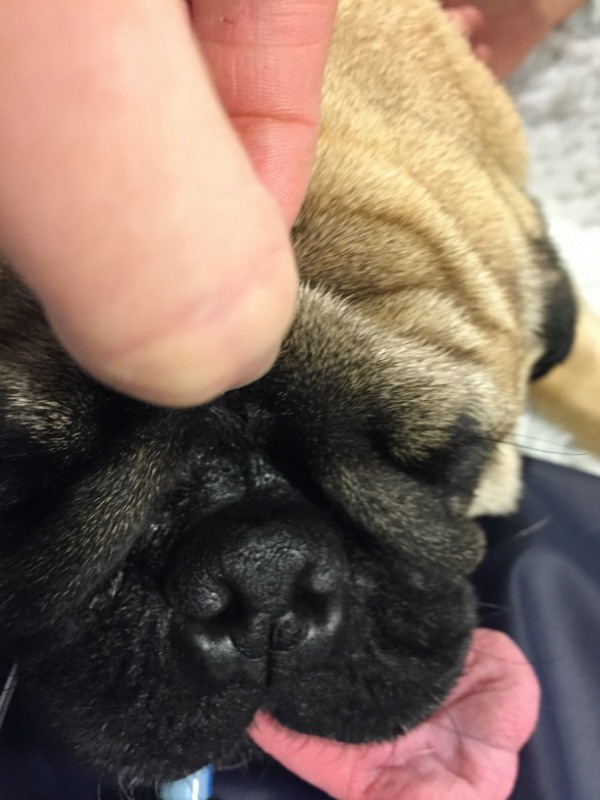 As part of their breed conformation, Pugs have deep skin folds around their nose and eyes and it was under Hardy’s nasal skin fold that his itchy problem was lurking. The deep, dark, warm and moist recess between the skin fold above Hardy’s nose had provided a lovely environment for the growth of a range of bacteria. It was this skin infection that was causing the irritation to his face. The fold was swabbed and sent for culture so that appropriate antibiotics could be prescribed. 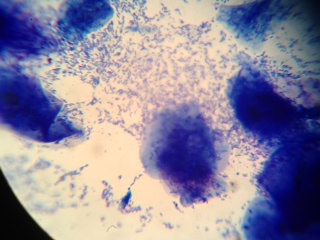 Here is a picture of showing all the bacteria that were growing in this facial fold.  The large purple blobs are actually white blood cells trying to gobble (phagocytose) these bacteria and eliminate them.  All the very small purple dots you can see are thousands of individual bacteria!

The swab results that came back from the lab made for interesting reading with not one but three types of bacteria causing the infection. Worryingly some of these bacteria were already showing evidence of antibiotic resistance so we had to carefully pick the right type of drug to ensure all three infections where dealt with at once. 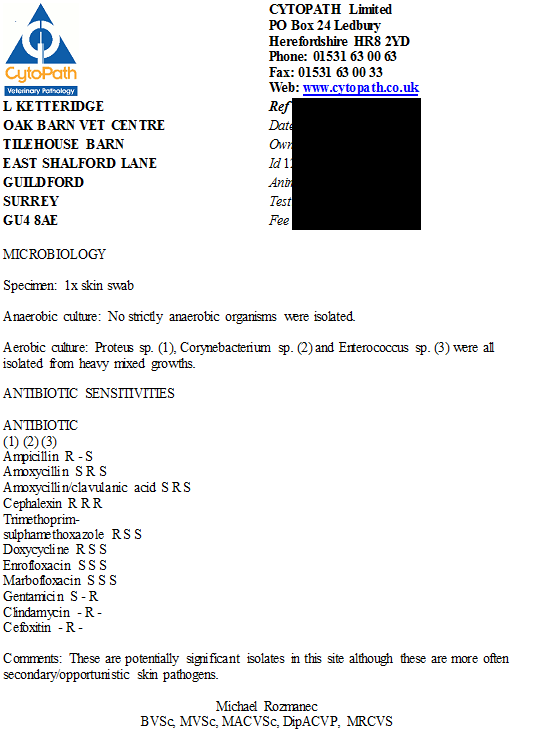 Over the coming weeks Hardy’s eye ulcer slowly healed and his skin infection was treated with antibiotics and topical antiseptic gel and resolved nicely. We got to see Hardy regularly as he became an expert at avoiding his owner’s efforts to apply eye drops at home!

Towards the end of his treatment course it was decided that the best long term option was to surgically remove Hardy’s skin fold to allow air to circulate.  The theory being that with the skin dry in its natural state it would be much harder for infections to take hold.  Otherwise if the deep fold was allowed to remain there was nothing to stop this from reoccuring.

Hardy sailed through his anaesthetic and surgery and 2 weeks later, having had his stitches removed, his facial fold had healed nicely. With a bit of luck this will avoid future skin infections and reduce the risk of him developing recurrent eye problems as well.   There are some images in the gallery below showing this operation but be warned as with all facial ops the pictures are pretty gruesome!  For the more sensible here is a photo post operatively as you can see air can now circulate quite easily all around the nose - even better there is no longer any hair irritating his eyes either! 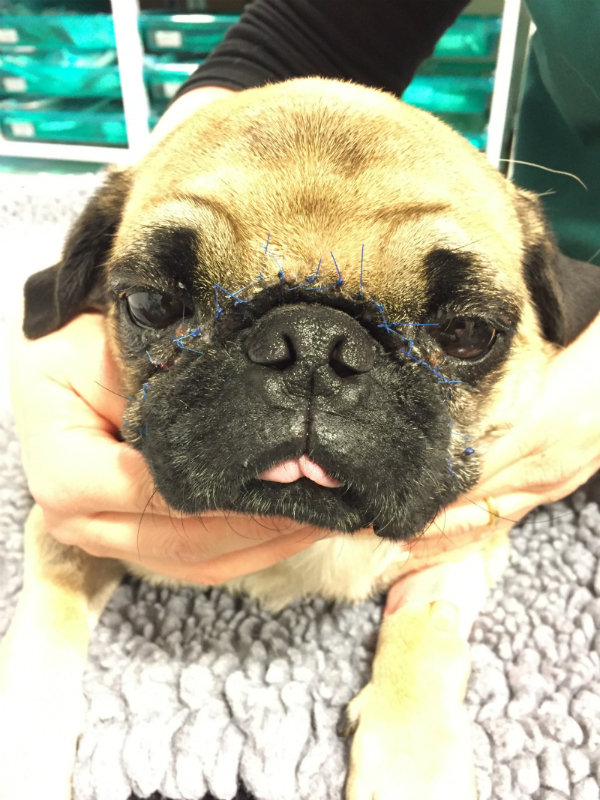 We see a number of health problems in dogs related to their breeding conformation and extremes of conformation in certain breeds are starting to be recognised as being detrimental to the health of individuals. It is always worthwhile, when deciding to take ownership of a certain breed, to research potential associated health problems and what to look for. We can give advice and guidance regarding breed choice and health issues. An increase in awareness of breed related health problems will hopefully encourage breeders in the future to look to sensible breeding motivated by good health rather than conformation.

As for Hardy he has not lost any of his good looks but will hopefully avoid recurrent skin fold infections and he is still as enthusiastic as ever when visiting us.