Sam is our very brave Case of the Month for August - it's not very often you have a tumour that weighs nearly 20% of your body weight surgically removed and make a complete recovery!  Read on for Sam's amazing story but be warned there are some gory photos!

Sam is a nine year old 'fallen angel' - a rescue from Hearing Dogs for the Deaf who never made it through final qualifications.  However this meant he was very happy and very much loved in his 'non-working' household!  A cross between a black Cocker Spaniel and a grey Lhasa Apso he had always enjoyed a svelte figure if not been a bit of a fluffy boy who needed regular hair cuts.

He was in fine form when presented to Louise at the practice, eating well and full of his usual beans, the only concern that he had been on a diet and yet his weight and ever expanding waistline were not responding to the lack of callories.  Palpation of his abdomen in the consultation revealed a large abdominal mass but no other signs of illness and Sam was admitted straight away for further investigations.

Very quickly it became apparant that Sam had an enormous splenic tumour.  X-rays of his chest revealed no sign of spread but the tumour was so big it had pushed all of his abdominal organs well to the side.  It was a miracle he still felt so well and was showing no clinical signs of illness. 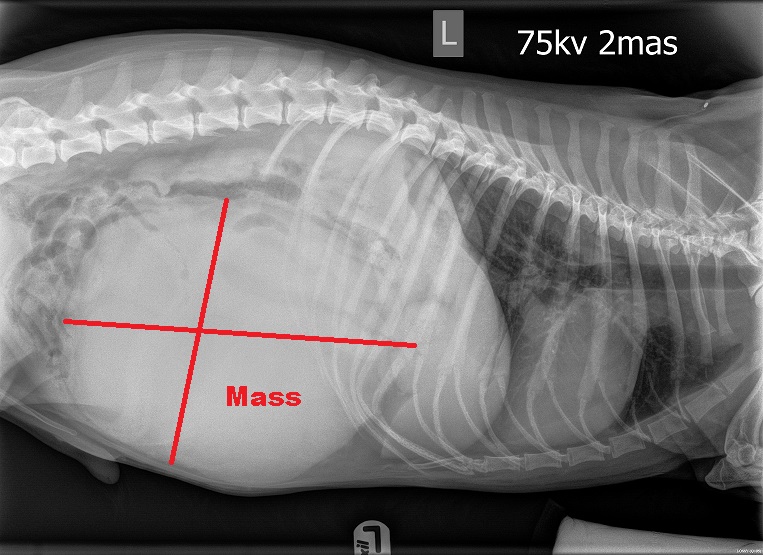 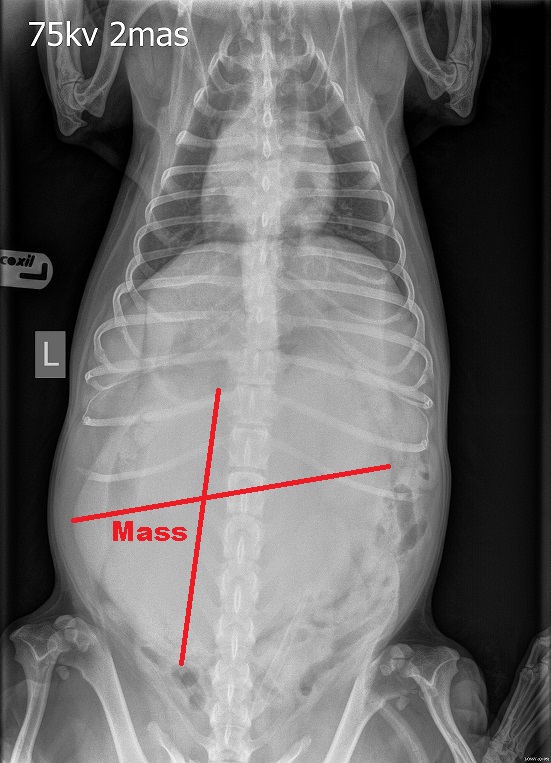 An ultrasound scan of the mass showed that it contained several large pockets of free fluid and given it's size there was risk of rupture and potential life threatening haemorrahge.  On discussion with his now very worried owners, and despite only having been admitted an hour previously, Sam jumped the surgical queue and went straight to the front, for emergency surgery to see if by removing his spleen his life could be saved.

The spleen is a flat tongue shaped organ that sits in the abdomen, nestled around the bowel like a belt.  It is responsible for filtering blood cells, removing the old worn out ones and recycling iron and protein so that more can be made by the bone marrow.  It also contains lots of white blood cells that weed out any toxins or infectious material in the blood stream and remove them from circulation.  However, you can live without a spleen quite happily which is good luck as far as Sam was concerned.

Blood samples showed no sign of other problems and with no free fluid indicating a previous bleed in to his abdomen, Sam proceeded with an anaesthetic and an emergency splenectomy.  The tumour was so large that when lying on his back in theatre the table needed to be tilted to a good 45 degree angle to allow him to breathe properly without the enormous mass squashing his diaphragm.  Claire, one of our brilliant nurses, did an amazing job managing his anaesthetic, whilst it took two surgeons to carefully remove Sam's spleen!  Two abdominal lymph nodes were also removed at the same time for further analysis at the lab. 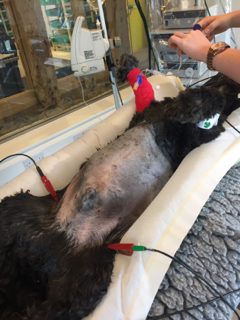 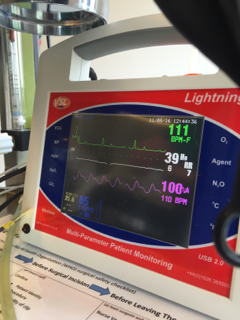 Sam all prepared for his surgery - our capnograph multiparameter working hard during his difficult anaesthetic!

Poor Sam had an enormous operation scar - it ran from the edge of his rib cage all the way along the midline, past his belly button and along side his penis!   Without such a large hole the mass would never have been removed from his abdomen.  He was sutured up and had a nifty romper suit to prevent him from bothering his wound. 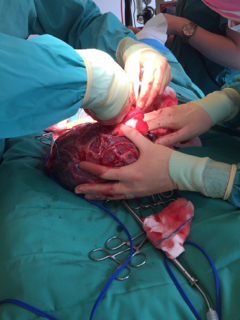 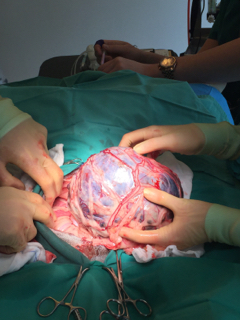 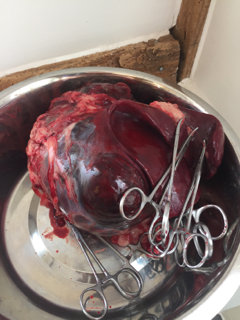 All out and weighing a whopping 2.1kg!

Recovery was very quick - he obviously felt much better now with so much more space in his belly, and was very keen to eat as soon as he was awake enough!   After a very settled night staying with us, he trotted off home the next morning with some pain relief for the next few days and never looked back!  He was most upset about sutures running so close to his privates but other than that, you would not have know he had had surgery!

The mass and the lymph nodes were sent of for histopathology to allow a diagnosis of the type of cancer and the risk of potential spread already.   A nervous wait ensued.  Classically tumours of the spleen arise from the blood vessels and can sadly be very aggressive and terminal (haemangiosarcomas).  However in Sam's case we had the best news back - A benign haemangioma, with no spread to the lymph nodes.  This meant that surgery had been a complete success and Sam was cured!!  A fantastic ending all round.